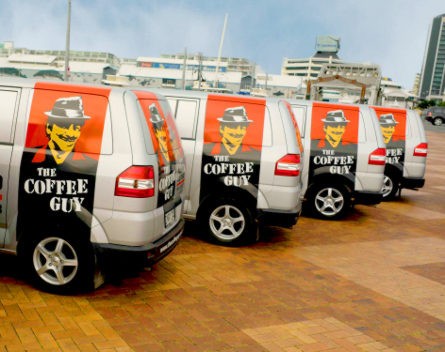 New Zealand-founded franchise The Coffee Guy is looking to establish up to 200 mobile coffee vans in Australia, six months after being acquired by Retail Food Group.

The Coffee Guy, founded in New Zealand in 2005, has grown to include more than 50 mobile vans, two drive-through stores and one standalone kiosk.

In November last year, the business was acquired by Australian franchise heavyweight Retail Food Group, which owns a stable of brands including the Donut King and Brumby’s Bakery.

Now RFG has unveiled a plan to establish 100 mobile coffee vans in Australia in the next two and a half years, and as many as 200 in the next five to seven years.

The Coffee Guy operations manager Jo Mansfield told StartupSmart now is as good a time as any to launch the brand in the Australian market.

“The coffee industry in Australia could be considered mature on one hand but there’s still… a demand for quality coffee in the mobile market,” Mansfield says.

“There’s a lot of coffee vans out there but for those coffee vans to do it consistently – there’s still huge demand for that.”

“The fundamentals of the brand will not change for the Australian market… There’ll be a couple of little tweaks in terms of the van build. We’re going to add a blender and fridge.”

“That’s going to enable the Australian franchisees to offer a quality range of produce. In New Zealand, it is just the hot coffee range.”

“Over here, due to the weather, blended drinks are very popular. But the core business of Monday to Friday, visiting businesses on the corporate run – that is the key to the business.”

Mansfield says franchisees can choose whether or not they want to work on weekends, insisting The Coffee Guy is, first and foremost, a lifestyle choice.

“The Coffee Guy is about lifestyle. You can’t make a million dollars a year but you can make a good life for yourself,” he says.

“[It is structured so that] Monday to Friday, they can make an income. Some people choose to do weekend work and some people won’t.

“The Coffee Guy is for an owner-operator who is looking to make a change.”

Mansfield says while most franchisees for a brand such as The Coffee Guy are aged 35-45, there is also interest coming from retired or semi-retired people looking to supplement their income.

“There is more interest coming from that direction. People are looking for something they can get into that is quite simple… I have known quite a few retirees to run a coffee van and do quite well,” he says.

“It is a low-cost entry option. It actually opens the door up for more people who want to own their own business,” Mansfield says.

“At this stage, being for this year, we’re focusing on the Brisbane and Gold Coast regions – we’d like to have new franchisees close by.

“But we’re open to enquiries from anywhere around Australia and next year we’ll be targeting Australia-wide.”