OPINION: The startups are like girlfriends analogy needs to die, along with other sexist gaffes 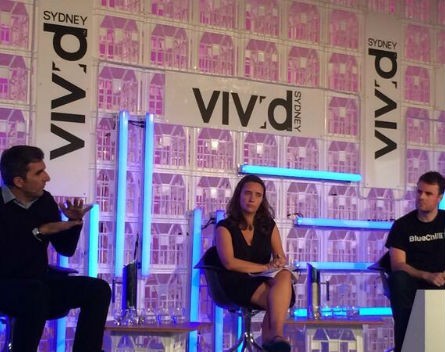 Startups, we have a problem.

Less than 24 hours after the justified storm of disapproval in response to Atlassian’s engineer referring to Maven as a “demanding”, ”complaining” and ”interrupting” girlfriend, I was sitting at Innovation Bay’s Smart Money event (part of Vivid Sydney) to hear the analogy repeated.

David Kenney, partner at Hall Chadwick, was giving a talk on “what a good deal looks like”, when he told the audience that “startups are like new girlfriends – really sexy”. And just to make sure we understood his classy analogy, he repeated it later in the talk with a full slide of awkward references.

“Startups are like a new girlfriend – sexy” at #smartmoney. Can we raise our standards on this talk?! In light of @atlassian – gobsmacked.

I was gobsmacked, but it wasn’t the first sexist gaffe at the event.

A number of very experienced startup women in the room were insulted by host and co-founder of influential investor group Innovation Bay, Ian Gardiner, who thanked the “gents” when referring to the event’s sponsors and partners. Fumbling at his comment, he said, “Well, none of them have women in management.”

Turns out that’s not the case.

Telstra’s Muru-D, a sponsor, had its co-founder and head Ann Parker moderating a panel at the event, so Gardiner’s comment can barely be excused as ignorance. Parker was formerly at Wayra Europe, Telefonica’s digital start-up accelerator program as head of operations, where she helped launch programs across Europe with the aim to create lots of Silicon Valleys.

Sitting next to me was Clare Hallam, from another event partner Pollenizer where she is chief operating officer. Hallam’s been the financial and operations brain behind the accelerator from the very early days. She has over 25 years’ experience working in the finance and operations space in both large corporates and startups across the UK and Australia.

BlueChilli, another event partner, has Candace Grier as its general manager and Catherine Eibner as its lead startup advisor. Eibner assists BlueChilli investments in growth, connections and structure. She used to head up Microsoft’s BizSpark and has her own startup, Project Tripod.

The shocking truth of it is sexism is so much a part of the industry that it barely raises eyebrows from within. And when it does, we squirm awkwardly in our seats and don’t do much more.

For the most part people ignored what happened yesterday, or chose not to make a fuss in public, in the interests of not embarrassing an influential investor organisation that hosted it.

It seems that startup mantra is: Disrupt! Just not sexism. I, for one, feel that’s just not good enough.