“Paperwork is shit”: Why construction managers are going ape over app 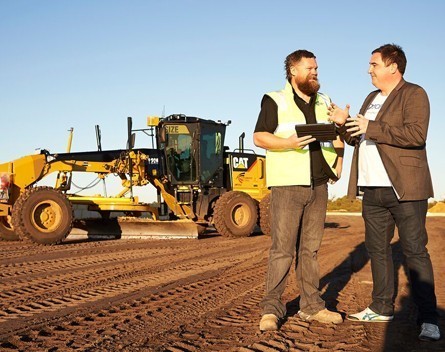 The app allows contractors to managed productivity reports, toolbox meetings, site drawings and other forms either on iPad or through web devices.

The investment round was led by Jolimont Global and Viburnum Funds, both of which have experience investing in mining and oilfield services technologies.

The construction market in Australia employs over 1 million people, and Edwards estimates between 15 and 20% of those are potential customers – project managers, supervisors “the guys that fill in forms every day”.

So far APE Mobile has only secured a “small fraction” of the market, but those that do use the app, love it, Edwards says.

Fifty-five per cent of its growth comes from referrals and it was customer feedback that helped the startup close its investment round.

During the due diligence process the startup’s investors approached 10 customers to hear their thoughts on the app. It was the strength of their testimonies that pushed investors over the line.

There’s a pretty simple reason customers like the product so much, Edwards says, and it can be found on the startup’s T-shirts.

“APE Mobile, because paperwork is shit,” Edwards explains with a laugh.

“We’re not (incentivising) referrals, it’s growing organically from people that love using the product. We’ve had customers come in and sign up after interviewing users for jobs, who have said they’d only take the position if they agreed to start using our app.”

While the initial focus for APE Mobile is the Australian market, it’s being pulled into international markets by requests from potential customers.

“That’s something that’s really exciting for us. We hadn’t planned to be international just yet. But we’ve found ourselves being pulled into international markets, we’re not having to push ourselves into new territory, which is ideal as a startup really,” Edwards says.

Since launch in January last year the startup has experienced monthly revenue growth of 20% and is on track to hit its revenue target of $500,000 for the year.