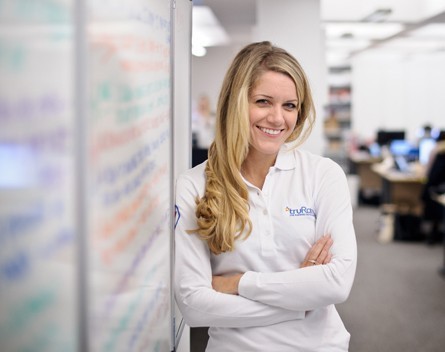 UK-based point-of-payment ratings system truRating has launched in Australia, as CEO and founder Georgina Nelson says the sector is “ripe for disruption”.

The startup allows a question to be answered via the payment terminal, with the customer rating the experience, service, value, atmosphere or product from zero to nine.

TruRating launched in the UK in February, and has processed over 400,000 ratings, with an 88% participation rate among customers.

It’s currently in a pilot phase in Australia, and will launch properly early next year.

“Our initial technology release focuses on larger retailers and hospitality companies whose payment systems are integrated with their till,” Nelson says.

“Later in the year we’ll also be available to smaller merchants whose payment terminals operate as standalone units.”

“Australia has a thriving payments industry, with a stable but competitive acquiring base and a few main players in the integration and terminal space, all of whom are looking for innovative solutions to provide to their merchant customers,” she says.

The launch comes as there has been an increasingly focus on Australia’s fintech startup scene, with the opening of a large co-working space in Sydney, and the chief executive of Tyro calling for 1000 fintech startups to be created in the city in the next two years.

Nelson says fintech in Australia is still in its infancy, but there are many opportunities for local and international players.

“The Australian fintech entrepreneur market is in its early stages in comparison to the UK and London where our head office is located,” she says.

“However, there is a vibrant startup community that is beginning to take shape, along with nascent incubators and funding opportunities.”

“We see the Australian payments industry as ripe for disruption and providing a great opportunity for highly innovative companies like ours to rapidly build momentum and success.”

Although it is becoming an increasingly competitive market, Nelson says truRating will offer something new to Australian businesses.

“We’re really in a unique space – there’s nothing like truRating in Australia that is able to reliably capture mass customer feedback at the point of purchase,” she says.

“Whilst other methods have their benefits in gathering small amounts of rich qualitative commentary, merchants are really looking for a bedrock of data that they can consistently rely on to make sound business decisions.”

The feedback has been positive from the pilot stage, Nelson says.

“Although truRating is very much in its early stages in Australia, we’re confident of achieving the same success as we’ve already seen in the UK,” she says.