Perth International Arts Festival gets hacked – in a good way 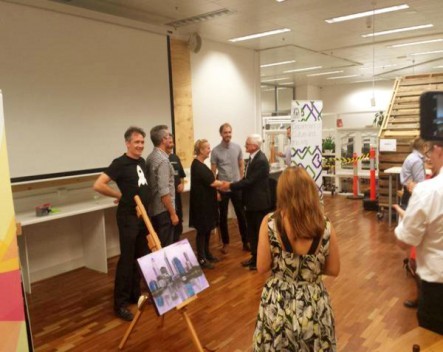 Art and technology converged at the Perth International Arts Festival over the past week to create digital artwork with no limits.

Hack the Festival was launched in conjunction with Perth startup hub Spacecubed, to bring together artists and people with technical backgrounds and inject new skills onto the art scene.

Fifteen teams consisting of everything from web designers and developers, to visual artists, composers and data scientists had 24 hours to create digital artworks and were guided by a team of mentors from the fields of art, technology and business. After a week of refining their projects the teams then pitched to the judging panel.

The winning team came from Perth Artifactory for their “Sonic BollART”. They were awarded a $5000 art grant from the state’s Department of Culture and the Arts.

Program manager at Spacecubed, Tamryn Barker, says the hackathon explored the concept of the artist as an entrepreneur. She says that accomplished digital artists who are running their own businesses are discovering that there was an increasing demand for customised software for creative purposes. It highlighted the transfer of such software from creative industries to other sectors.

“Many artists use advanced technology to produce their work,” she says.

“There has been a growth of creative industries, such as gaming, which requires bespoke software and there has been an increase in requests for specialized software. According to a coder, coding is creative. We wanted the actual product to be a creative output.

“This sort of event hadn’t been done before and we wanted to try something new. We wanted to support the arts and show what art brings to startups and what startups can bring to the arts.”

Barker says that the event was an opportunity to nurture the digital art community in Western Australia.

“We know that Sydney and Melbourne are strong hubs for the art and startup scene,” she says.

“It is a burgeoning industry with quite high projects for growth in the country. People at the event were between 25 and 40 years old and there were at least 50% of women among them, which is more than at other hackathons.”

Spacecubed founder Brodie McCulloch says the event aimed to bring diverse groups of people together in a bid to get new inspiration.