Policy Hack paper handed to government: But will it “get shit done”? 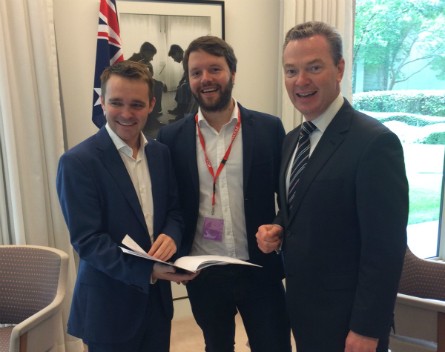 A document with 10 key innovation ideas and initiatives arising from last month’s Policy Hack has been delivered to the federal government.

The report, written up by StartupAUS, summarises each of the pitches from the policy hackathon, and was handed over to minister for industry, innovation and science Christopher Pyne and assistant minister for innovation Wyatt Roy on Thursday morning.

The eventual winner of the event at BlueChilli, which featured 150 participants, was an education initiative aimed at fostering an entrepreneurial culture in young Australians.

BlueChilli founder Sebastian Eckersley-Maslin says the event and accompanying document typifies a startup mantra that is now filtering in to policy decision-making: “get shit done”.

“Startups are really good at doing things fast and succinctly, and this report is an extension of that,” Eckersley-Maslin tells StartupSmart.

“The result of Policy Hack was that we came up with 10 really solid concepts and ideas that were workshopped and had government input and startup ecosystem collaboration.

“I’m excited that we have this attention at a senior level in government and Policy Hack enabled people who generally don’t have a voice to work direct with government bureaucrats and members of parliament on how to shape Australia’s startup future.”

The potential solutions and reforms to grow the Australian innovation ecosystem included in the report include an extension to the R&D tax incentive, a co-investment fund for female-led ventures, the creation of Aussie landing pads around the world and a new enterprise incentive scheme.

Policy Hack will be the first of many events and initiatives designed to bring together public servants and the startup sector, Roy says.

“It’s exciting to see disruption to the traditional policy-making process, with some of those ideas now finding their way to the next level of government,” Roy says.

StartupAUS head of strategy and advocacy and author of the report Alex McCauley says it includes many means to implement practical strategies to help a sector that is now on the forefront of politics.

“This report provides a window into an area of economic policy which is of vital importance to Australia, but which is a bit opaque for a lot of people,” McCauley says.

“That’s what this hackathon was about – the best minds in the business helping to develop policies to modernise Australia’s economy.

“Recently we have really been able to feel a change in the national conversation about our economic future. Innovation policy is now front and centre. There are no silver bullets, and Australia is playing catch-up in this area.

“But we’re starting to really build up some momentum and we’re confident we’ll see some very positive initiatives like these in the near future.”

Eckersley-Maslin agrees, saying it’s now about making sure some of these recommendations are included in the government’s upcoming innovation statement, which will be released next month.

“The challenge now is to keep our parliamentary friends accountable to these ideas and keep pushing them on it,” he says.

“I honestly think some of the initiatives in it will make it into the innovation statement.”

The 10 recommendations included in the StartupAUS document: