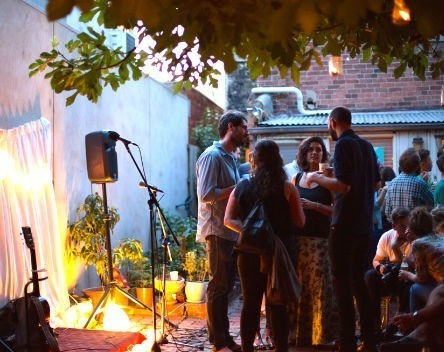 Working as a professional musician for a decade, Matt Walters knows all too well the challenges of operating in the music industry.

He toured nearly constantly, and was on a major label for a while, but due to overheads, venue prices and the like, still struggled to get by.

“I had to play live shows to make ends meet, but often with the structure of the live music industry, I wasn’t getting paid properly,” Walters says. “Most of the money was just going back into touring, and I was barely breaking even.”

Now the Melbourne-based artist has created a startup he thinks can solve this problem, with the aim of ensuring musicians are paid properly for their performances, and punters get a different gig experience.

Walters launched Parlour in January, an online platform connecting musicians with people willing to host a show at their own home or other space, effectively cutting out the concert promoter middleman who often takes the lion’s share of profit. Almost 900 artists have already signed up.

Users can enter their details on the site if they want to host a show, with information about the location and a wish-list of bands. Musicians can also sign up and be connected with one of these potential hosts. Ticket prices are usually around $10, and artists take 90% of the sales.

Walters played his first house show in 2011, and was immediately drawn to the concept.

“With all the overheads removed, I realised I can actually get paid properly,” he says. “I fell in love with the experience, and with the communion of people.”

Parlour has already hosted about 50 gigs from the likes of Lisa Mitchell, Dan Kelly, Jen Cloher and Oh Mercy, with many more to come.

Parlour shows have happened everywhere from sheds to yoga studios, and this is part of the startup’s appeal, Walters says.

“You can have a pretty banal space, but if you bring music into it you can bring it to life,” he says.

“People have a desire to have an experience that isn’t going to a stadium or even a smaller venue.

“They want something more intimate that they can experience with their close friends.”

The team of four at Parlour currently connects artists to potential hosts, but they’re working on creating a platform that allows this process to be done entirely autonomously by artists.

The first ever Parlour gig was in Walters’ own backyard, and served as a proof-of-concept of sorts for the idea.

“If I can get this right in my backyard, then I can scale it,” he says. “And that’s exactly what happened. It gave me confidence in the concept.”