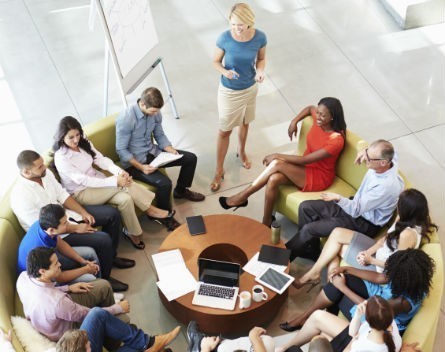 AngelCube’s latest batch of startups showed their ideas to the world for the first time at the accelerator’s Melbourne community Demo Day on Tuesday night.

It was first chance for the startups to pitch with the pressure of 200 people in the room, which is an understandably daunting task, but without the additional stress of being a make or break pitch for investment.

Ekinici argues that corporate training is too general. With large companies spending great swathes of money on programs that employees get very little benefit from. Peer Academy’s marketplace allows individual employees to choose their own workshops. It’s still early days but 25% of Peer Academy’s customers over the last six months have attended more than one class.

Peer Academy’s average booking costs $5000, of which the startup takes 30% commission, while the other 70% goes to those teaching the courses. Eknici says annually Australia spends somewhere around $9.3 billion on professional development, a figure that rises to $70 billion in the United States.

Probably the best combination of product and pitch of the night, Coin Craft is a cloud-based cash flow and workforce planning platform for architects.

King says it lies at the intersection of three different types of software – project management, cash flow forecasting and resource scheduling. Coin Craft borrows from each category to become what King describes as the first system “to uniquely model your entire business”. It costs $40 per user, per month. The startup has already received interest from other industries including engineering, graphic design and advertising. Add those industries to architecture and you get an $8.2 billion market.

Hardware startup Jack.io is IoT device linked to a cloud-based platform that monitors standing desk usage to ensure employees get the most from them.

“80,000 hours is the amount of time office workers spend sitting in their lifetime. Scientists are calling it the sitting disease and it is as bad as smoking,” McGrane says.

Companies, like PayPal a Jack beta client, are beginning to purchase standing desks in order to “immunise” their workforces from sedentary office life, McGrane says. But there’s a problem, too often employees regress back to the position they spend the most time – sitting. Jack’s IoT device connects to the underside of a sit-stand workstation and it knows when someone is sitting, standing, or away from the desk. It uses elements of gamification and reporting to encourage more standing.

McGrane says people transition from sitting to standing seven times more often when using Jack. The startup offers its own Jack Intelligent Powered Standing desk, although it was notably absent from the pitchdeck, or an IoT device that can be purchased and used with supported third party standing desks. The device is sold with a $10 per month subscription.

“Our competitive advantage is we can be retrofitted across any sit-stand desk on the market,” McGrane says.

CurveUp offers curated reports that demonstrate the value of PR efforts. It can determine how many sales are the direct result of PR activity – but only those from online media coverage. Metrics in the report include how many mentions in blogs, websites and social media, and impact is determined via integrations with Google Analytics and similar platforms.

Customers are charged $299 per month, after a four-week free trial period. While there are large competitors like iSentia, Noroozi says CurveUp differentiates itself by offering a cheaper service tailored for small and medium businesses.

“CurveUp goes and gathers all the information and big data. It then merges it with (the business owner’s) goal and the strategy for their campaign. Then it will create a tailored report,” Noroozi says.

In the slickest pitch of the night, Murphy outlined his vision for Tribe Growth, a startup that’s working towards creating an “artificial intelligence” platform for social media marketing.

By using a mixture of targeted engagements, favourites or retweets for Twitter, likes or shares for Facebook, Tribe Growth increases the reach of its customers’ social accounts. Tribe Growth charges between $97 and $397 per month, which Murphy says roughly equates to 10 cents per qualified, targeted audience member.

“We’re intelligent engagement to grow your community and to convert those new community members into customers,” Murphy says.

“We’re low effort and low cost, and intensely focused on every dollar spent makes a profit.”

SweetHawk’s live voice platform was probably the most impressive product pitched on the night, and with a bit more polish it could have been the best pitch. Billing itself as a “voice for ecommerce” SweetHawk improves mobile sales conversion by connecting consumers directly to businesses via a phone call, replacing cumbersome mobile forms. SweetHawk charges businesses $1 per call and is able to collect caller data, and automate call-back scheduling.

This can be done presently via phone number listings, but for the marketplaces that are displaying those listings, that comes with the risk of moving the relationship off-platform. The speed at which a sale is closed is important. Godden cites a Harvard Business Review study that found businesses are 60 times more likely to qualify a lead after generation if businesses speak to that customer in the first hour, as opposed to 24 hours later.

“Most people get that devices are getting smaller and smaller,” Godden said.

“What’s less obvious is keyboards are beginning to disappear. Mobile e-commerce traffic has just recently risen above desktop. Conversion rates on mobile phones is a third that of desktops. Why is that? (Because) filling out forms and typing on mobile devices sucks.”