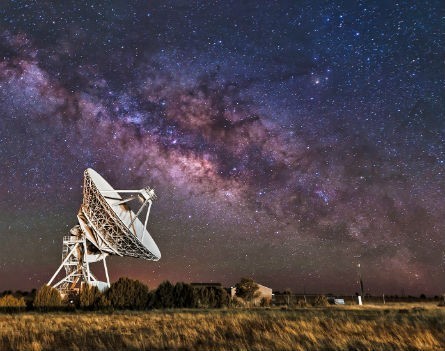 Cutbacks to Australia’s science funding from the federal government are forcing us to look at a new funding model for one of the nation’s best space research facilities.

The Mopra telescope, at Siding Spring Observatory in New South Wales, is a frontline facility that is in imminent danger of closure despite a growing record of achievement and productivity.

It is an example of how a fully automated, cost-effective research facility can be run. Yet its owner, CSIRO, does not have the resources to operate the telescope beyond the end of this year.

Mopra supports an active community of scientists in Australia and overseas. It is mid-way through charting a new atlas of our galaxy, mapping the interstellar gas of the southern Milky Way. A new vista is being opened in front of us of the star-forming clouds that are the engine rooms that drive a galactic ecology.

If federal government funding is not available to keep the facility open, then we need to look at potential alternatives. So can crowdfunding save Mopra from closure? Can it keep it us on our mission to chart interstellar space? Can it maintain a hands-on tool to train the next generation of scientists, to enable them to follow their dreams?

We do not know, but it is a route we – Team Mopra – are pursuing. The aim is to raise at least A$65,000 by Sunday, October 11, through voluntary donations to our Kickstarter campaign. More than 270 people have already pledged a total of about A$18,000, so there is still a long way to go.

The idea of turning to crowdfunding for science is gaining more attention here in Australia and overseas.

This is a new experiment for us, a step into the unknown. As we chart unknown reaches of the galaxy, we are seeking support from a new community, one we do not yet know.

Why research needs a long-term vision

One of the things we’ve surely learned over the many decades of scientific research is that results do not always come quickly, and any potential future use of the research is not always obvious.

At the instigation of quantum theory more than 100 years ago, who could have conceived of the mobile phone? Scientists at CERN, seeking to discover fundamental particles that are the building blocks of matter, developed the world Wide Web to keep track of their expanding network of collaborators and documentation. Its use today has transformed the way we communicate.

Basic research is the ultimate driver of the technology that underpins society. But pitching the idea to government that there is ultimately a financial return to be made mostly falls upon deaf ears.

Winners cannot reliably be picked in advance. The timescale for returns is usually measured in decades, not parliamentary cycles. Governments increasingly invest resources in directed research instead – to questions that can be easily posited, where apparent answers can be readily expected.

Nevertheless, researchers need to be pragmatic too. Governments do not have unlimited purses. Until now public funding has been the only option for blue-sky research. Few commercial organisations are prepared to spare resources to support it, given the lack of immediate profit.

Philanthropists might be sought, but they are few. Individual researchers rarely have the time, the opportunity, or even the acumen to pitch their cases before such individuals.

How crowdfunding can help

But with the growth of social media we have a dramatically improved ability to connect with audiences across the globe. This opens up the possibility of using crowdfunding for basic research.

Individuals do not need to be publicly accountable for how they spend their money, unlike politicians. They are free to support whatever causes they like. Their resources may be limited, but the pooling of thousands of donors, each sparing a few dollars, can readily match a government research grant.

There is a passion for science in the community, for furthering our understanding of nature. We just have to find a way of connecting people to that science.

Maintaining frontline research infrastructure in Australia is an area of critical need. Many hard-earned ventures, such as the Ginninderra Field Station, the Aspendale marine and atmospheric research laboratories and the Geelong animal health laboratory, are teetering on the brink of closure, despite active and productive contributions to the scientific endeavour.

This threat is often driven by the pursuit of future grand design experiments, mega-facilities with many international partners, such as the ALMA and SKA telescopes. Such frontier projects take decades to build. They tie up ever-increasing fractions of available resources. At the same time they produce relatively little science while in their developmental stage.

Investment in next-generation facilities is necessary if we are to advance. But if this comes at the cost of closing productive facilities, a generation of scientists can be lost.

The careers of students and postdoctoral fellows cannot be built simply upon the promise of a future facility. By the time it eventuates, there may no longer be a community of scientists with the skill set needed to use the facility to its potential.

Crowdfunding provides us with a new opportunity, a means of seeking out fellow travellers to join us on a voyage of exploration of interstellar space. How will the experiment work out? What will we discover?

We do not know, but we will soon found out if our Kickstarter campaign can come up with the funds to save the Mopra telescope from closure.