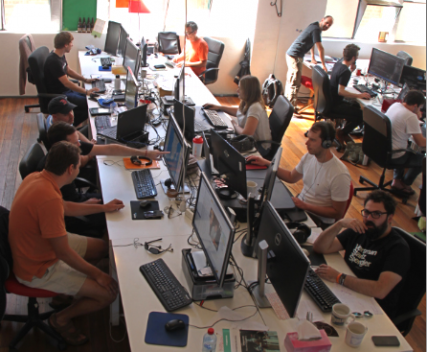 When my co-founder Bernie and I began to build the Rome2rio product, we drew heavily on our experience working at Microsoft in Redmond, Washington.

As time passes and our team grows, we are consciously blending various cultural characteristics of US tech companies with our own Australian approach to work, to form a unique Rome2rio engineering culture.

Here are a few of the things we learned and some tips for other startups.

1. Take the time to get the hiring right

The key to a great engineering team is hiring the right people, so naturally we put plenty of effort into recruiting. We use the same style of interview loop process, involving five or six hour-long technical and coding whiteboard sessions.

The approach maximizes information for hiring decisions and gives the entire team a voice on who we ultimately hire.

We also like to move candidates quickly through the entire interview and hiring process. Typically it takes us two weeks from receiving a CV or referral to making an offer – it’s good to instill a fast-moving and decisive culture.

2. Keep it close and fun

The entire Rome2rio team, except for our global content staffers, sit within a few metres of each other.

With so many complex engineering discussions happening every day, this arrangement is a key to keeping development running smoothly and productively.

Keeping everyone together is a luxury that larger companies often cannot afford.

3. Keep meetings to a minimum

Engineers typically hate having too many formal meetings that get in the way of being productive, so we are pretty passionate about keeping meetings to a minimum.

We hold a company all-hands meeting once per fortnight where we present new features, report on conferences, share management news and learn from experiment results.

We strive to keep the meeting under one hour; anything more and the team gets restless.

We run a 10:30am daily stand-up for the engineering team at the office pool table. Each person gives a quick summary of what they accomplished yesterday, and what they’re working on today.

At Microsoft, whenever somebody demonstrated a cool new feature it was customary to yell “ship it”.

It’s usually a joke – the demo is often pretty rough around the edges – but also demonstrates a culture of bias towards action that we love and have adopted.

This culture includes doing regular releases to production and minimising the amount of process surrounding making stuff happen. We don’t employ project managers and entrust engineers to drive a feature from concept to completion.

We introduced a new concept this year: Technical Debt Friday. The engineering team loves it; it gives them a chance to pause their regular development work and pay off any technical debt in the code base.

What is technical debt? As any code base grows there is an increasing amount of badly organised, poorly named, confusingly arranged, or no longer used functionality that should be cleaned up. The debt builds up and is increasingly costly – adding more code becomes harder, more error-prone, and it takes longer for new hires to understand what everything does.

6. Use staff reviews to celebrate achievements

The only thing worse than performance reviews is not having them at all.

Software engineers often groan at the thought of a performance review. Some of our team have had bad experiences with them in the past and they can be rather meaningless if done badly.

But we believe they are essential for any business that wants to celebrate accomplishments and reward hard work. This can lead to a culture where promotions are only given out to those that ask for them, or those that are threatening to leave.

We have been doing staff reviews regularly since we hired our first developer. We use them as an opportunity to discuss recent accomplishments. We talk about how the team member can further their career and have an even bigger impact within the team. We ask for feedback on how we can better support them and their professional development.

It’s a chance to reassess salaries, with the philosophy of promoting people based upon already demonstrated growth rather than promoting with the expectation of new responsibilities.

7. Work to improve the gender imbalance

We’ve covered all the positive things so here is something we are not proud of – our engineering team is currently entirely male.

We hope this is something we can improve with time, but fewer than 5% of applicants for engineering positions that we have advertised were women. We have done better with the non-engineering part of our team, with 40% female representation.

It is good to see the Australian government investing to address this imbalance in the tech sector generally.

Michael Cameron is the co-founder of Rome2rio.