Should Australia’s Silicon Valley be Melbourne or Sydney? Why not build a startup nation instead! 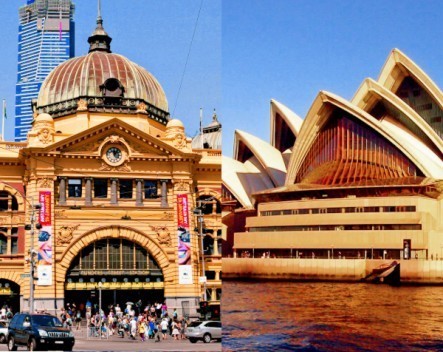 It’s long been the debate that has divided a nation. On one side is a settlement founded by convicts, and on the other, a once illegal colony founded by gold miners.

It’s the battle between the cozzies and bathers. The scallops and the potato cakes. Rugby league and Aussie rules. Australia’s international city against the sporting/arts/coffee capital of the cosmos. The long “a” in Newcastle against the short “a” of Castlemaine.

The battle of city buses and double decker trains against bunched up trams and limited express Metro services to Flinders Street via the City Loop. (That last one is a battle over which system is the least unreliable.)

With the inevitability of someone tumbling head-first down a slippery dip – or should that be a slide – the debate has crossed into startup land. Which end of the Hume Highway (for those of you south of the border, that’s the Hume Freeway) is to become Australia’s Silicon Valley?

North of the Murray, along poorly laid out streets in a state of perpetual traffic jam, the consensus is the city that is home to Fishburners and BlueChilli should become Australia’s Silicon Valley.

Meanwhile, on the other side of The Alps (or as the locals say it, “Theelps”), Melburnians sit in their alleyways, sipping Magic Coffees chatting about how the laneways between York Butter Factory and Inspire9 are the natural home for this nation’s Silicon Valley.

So which end of the great Hume power corridor should be home to Australia’s startups? North or South of the Murray?

Well, your loyal correspondent, from a corner of the hills known as Parts Unknown, says both sides of this argument need to wake up to themselves!

When it comes to highly scalable tech-enabled businesses, the NBN is a great leveller. Mix in AWS, the Google Cloud Platform or Microsoft Azure and there’s no reason why the next big thing in tech can’t launch from nearly anywhere in the country.

Indeed, from Joondalup to Geelong, Wollongong to Toowoomba and Bega to Cairns, startup scenes are booming in this nation’s regional cities. With Skype and Google Hangouts, there’s simply no reason why rural or regional startups can’t participate in most events hosted in the big city coworking spaces, or why conferences shouldn’t be uploaded to YouTube after the event.

And that’s without even mentioning the vibrant tech communities built around Startup Tasmania, SpaceCubed in Perth, iLab in Brisbane, Entry 29 in Canberra or Majoran in Adelaide.

Now, Sonny Jim Crockett, your dear Old Taskmaster says the Melburnians and Sydneysiders really need to get over themselves and realise there’s far more to this great nation than their two cities! Kids these days – they want the whole toy chest to themselves, but then they run out of juice before teatime and then there’s tears!

No, if Australia wants world class innovation, we don’t need to be a Silicon Valley – we need to become a Startup Nation!

So do you have a great startup idea? Forget about the Melbourne-Sydney rivalry – start from where you are!

Get it done – across Australia – today!

P.S. They’re not potato cakes or scallops because they’re neither a cake nor a form of seafood – they’re really potato fritters!