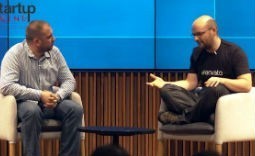 Envato co-founder Collis Ta’eed says he didn’t realise venture capital was an option when looking at ways to grow the business in its early days.

“I didn’t know that you could make people give you money for your business, so that kind of meant that it didn’t even occur to us to try,” he says.

Since being founded in 2006, Envato has grown its community organically to the point where it now reaches millions of people around the world.

Speaking at a Startup Grind Event in Melbourne recently Ta’eed says there are advantages and disadvantages to raising venture capital.

“I suppose the big benefit was not being on someone’s timeline,” he says.

“Take this all with a pinch of salt because I’ve never had an investment or raised money. So I don’t know. But from what I’ve read I think an investor brings with them expectations for what they’re after.

“But I can see that it would be neat to have investors to mentor you and guide you. Investors will often represents more than just money, they’ll bring wisdom, mentorship, experience, and that’s something I suppose to some extent we were lacking.

“Obviously money can bring speed to escalating what you’re doing. So for us as a bootstrapped company you’re going quite slow because you’re always just reinvesting your profits back into the business, and that caps the level of inorganic growth you’re able to take on.”

You can check out more of what Ta’eed had to say in the seven videos below.