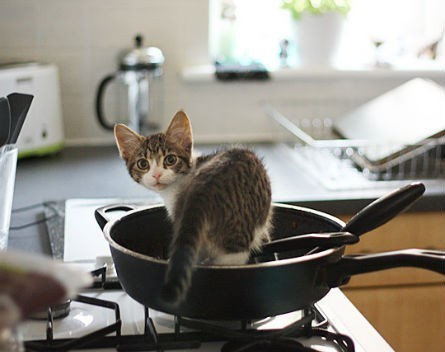 A Sydney startup has come up with a way to use technology to stop your pet from barking up the wrong tree once and for all.

Sensonix has launched Petguard, a smartphone app that prevents cheeky pets from exploring your favourite couch or roaming among precious china.

The system involves a small tag on the pet’s collar and a “sentinel” device placed in the no-go area, which constantly monitors the banned zone and alerts the user via an app if their pet has intruded.

If the user isn’t around to intervene, the device can also switch to an ultrasonic alarm, letting off a sound that only pets can hear, driving them away from the trouble area but not waking up their owner.

Creator Paul Moutzouris says the consistency of the app will allow a pet to be trained not to go into a certain area in the long term.

“We’ve developed a product that works as a behavioural training device,” Moutzouris says.

“It’s really hard to be naughty when you’re caught, and they’ll get caught 100% of the time.”

Personal experience with his mischievous dog and cat led Moutzouris to come up with the idea.

“The dog rummages through the bin,” Moutzouris says.

“He waits for me to walk out, looks really innocent, and then you walk out and he’ll rummage in it. He’d just wait for you to go and he knew exactly what he was doing.

“We’ve also found our cat sleeping in our baby’s cot, so that’s a real worry when you don’t even know they’re in the room.”

He wanted to buy something to fix this, but says he couldn’t find anything that didn’t seem cruel.

“There are products that do part of the job, like spikes in pot plants or chemical sprays, but that never felt right,” he says.

“There wasn’t anything that could actually change the behaviour of the pet.”

Users can also view a history of where their pets have been and how often, allowing them to gauge behavioural improvements, as well as giving an interesting insight into a day in the life of your pet.

Sensonix launched a Kickstarter campaign for the app at the start of this month, but Moutzouris says it’s not likely they’ll hit their target. It’s raised almost $5000 of its $60,000 goal, with just 13 days to go.

The team will be going back to the drawing board to reengineer the product, with the aim of removing some components to reduce the cost.

“It’s a bit of a pet project on the side with a bit of spare time,” Moutzouris says.

“But we are committed to it and there’s nothing else like it.”