Snapsave aims to be piggy bank for the modern age 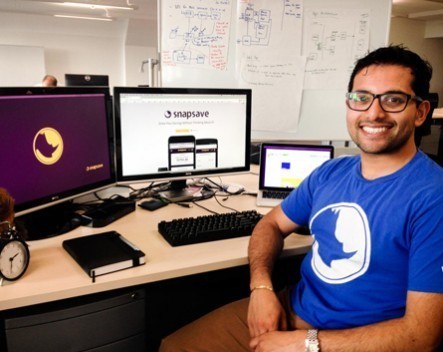 A Sydney startup wants to bring the age-old piggy bank into the 21st century and help people digitally save their spare change.

Snapsave is a new service that takes the left-over change from electronic transactions and transfers it into a savings account automatically.

Snapsave co-founder Jins Kaduthodil says the idea came from seeing his friends trying to save money while they were in university.

Despite working similarly earning jobs, Kaduthodil was saving for a house and going on holidays while his friends were living week-to-week.

After helping them manage their finances and save money, he realised it’s all about some simple saving methods.

“It all comes down to education and being frugal with how you spend,” Kaduthodil says.

He combined these ideals with the idea of a piggy bank, after having stored spare change in a jar in his room.

“I thought it’d be great to automate that in the digital world,” he says.

“It’s a couple of dollars a day and it doesn’t affect you psychologically, you don’t see it go. But those small bits of savings grow over time in the background.”

The fintech startup was eventually founded in July and is based in the Tyro co-working space in the heart of Sydney.

While it’ll eventually be available as a smartphone and watch app, the MVP will be a website application, linked to text messages.

A range of competitors

The fintech startup market is becoming increasingly saturated, and there are many services looking to help users save money or invest.

Kaduthodil says Snapsave is targeted at a different audience than most of its competitors.

“We’re focused at the start of the financial literacy chain – people who don’t have much money or are just struggling to understand the concept of saving money,” he says.

“It’s not just for my housemates, it’s for people stuck in a rut trying to get out of that. We’re not aiming it at the type of person that has cash lying around and are trying to figure out what to do with it.”

The use of electronic spare change isn’t a particularly new concept either, with US startup Acorns using these funds to invest, and Aussie company First Step following suit.

But Kaduthodil says theirs is a very different product.

“Acorn is for managing funds, it’s aimed at the person that has money but is lazy and doesn’t know what to do with it,” he says.

“Snapsave is for people with little money or who are in debt and are trying to get out of that situation and become self-sufficient.”

Another American startup Digit offers a very similar service as Snapsave, scanning transactions at the end of the day to find where money can be taken out. It’s currently only available in the US, but “hopes to expand internationally in the future”.

Plans to monetise and commercialise

The beta phase will be opening in December, with the aim to bring 1,000 early adopters on board.

It’s been entirely bootstrapped by the co-founders so far, and they’ll look to open an investment round after proving the MVP’s worth.

“We know what the vision is, so we want to know exactly how we should get there,” Kaduthodil says.

After launching properly and bringing customers on board, the plan is to build partnerships and spread across the APAC region.

Just don’t expect any deals with the big banks.

“One of our values is to be independent of a bank,” Kaduthodil says. “We want to be as open and diverse as possible to give it to as many people as possible.”

The Snapsave team want the product to remain free for users, so they’re currently experimenting with other ways to monetise the startup.

“I’m happy to run it at a bit of a loss to start off with, knowing it’s helping people,” Kaduthodil says.