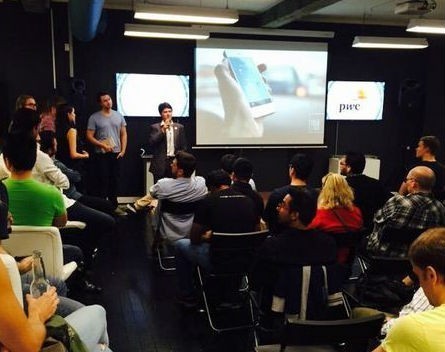 Startups need better access to government data in order to continue creating apps and tech companies that change people’s lives for the better, according to the NSW Minister for Innovation, Victor Dominello.

Dominello visited Australia’s largest co-working space Friday afternoon after being sworn-in last month and says the visit has helped shape his priorities for the next four years.

The minister told StartupSmart the highlight of the visit to Fishburners was meeting talented individuals all vying to create “a great vision for our future”.

“We’re living in an age with unparalleled innovation,” Dominello says.

“We are at the brink of curing cancer, we’re seeing deaf people hear and we’re seeing the beginnings of a bionic eye. The opportunities for good are just amazing. It’s very exciting to be a minister for innovation in our state which is leading the nation in so many ways, and we will continue to lead the nation in this portfolio.”

When asked what he learnt from the visit, Dominello pointed to the lack of computer programmers in Australia in comparison to industry demand.

“I will be speaking to the minister for education about that as it was definitely something I heard while visiting Fishburners,” he says.

“It came as a bit of a surprise to me – I would have thought there would have been a lot of young students wanting to be the next Bill Gates and wanting to change the world in that way.”

Another major focus for Dominello will be making it easier for startups to access government data.

“There was once a time when government refused to release the data in relation to the train times and that was because they were worried about showing the trains were three minutes behind,” he says.

“Now you download the Opal app and you can see when the next train is coming. This is another benefit of the information revolution – it genuinely puts power into the power of the market and the hands of the people. And if government can help that, then that is a great step forward.”

When asked whether inner-Sydney independent MP Alex Greenwich should be worried about the Liberals potentially scooping up more votes from the startup community given their focus on innovation this term, Dominello said he would not speculate about future elections and is instead focused on assisting startups as much as he can.

“If we become a more transparent government in terms of the data, well, that is the information the sector needs to create apps and improve services.”

Murray Hurps, the general manager of Fishburners, told StartupSmart he was very impressed by the minister’s visit and the fact NSW now has a dedicated minister for innovation.

“Obviously there’s a huge amount of money spent by government to make things work,” he says.

“There are ways to make that money have a double purpose – achieve the results and allow startups to innovate and create jobs.”

Hurps says politicians from all sides of politics are starting to show a growing interest in startups and this can only be a good thing for the economy.

“The interest is stronger now than I’ve ever see at Fishburners,” he says.

“There are obviously people terrified about what’s going to keep Australia viable and as productive as we’ve been into the future. To see the progress of the startup industry and the number and quality of entrepreneurs is such an obvious thing for government to get behind.”