“The best day Australian startups have seen in years”: Reactions to PM Turnbull 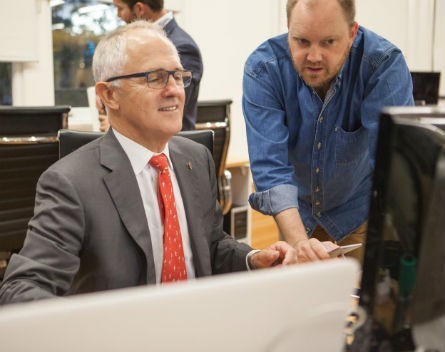 Founders, investors and entrepreneurs have welcomed former communications minister Malcolm Turnbull’s appointment as Prime Minister, with some labelling it the “best day Australian startups have seen in years”.

The reaction within the Australian startup community has been overwhelmingly positive to Turnbull’s victory, with many pointing to his experience in tech and proven desire to work with startups as encouraging for the future of the sector.

Turnbull’s first speech following a victorious leadership ballot touched on many key points for entrepreneurs, including disruption and agility.

“He gets startups, he understands it,” Dee says. “He’s got the right background, he comes from tech. He goes into Fishburners and converts naysayers by the end of the talk.”

“He’s on the ground talking to people, and that’s good for startups,” she says.

“He has the awareness, and we’ll have to wait to see how far it goes.”

Murray Hurps remembers when Turnbull spoke at Fishburners in May this year, where he won over a room of 150 entrepreneurs.

“I’ve had the pleasure of giving tours of Fishburners to some very impressive businesspeople, but Malcolm honestly asked some of the best questions I’ve heard being asked, and seemed to genuinely understand what our 151 startups are challenged with,” Hurps says.

“It’s great to see someone with Malcolm’s experience finally in a position to pull some of these levers and expose the significant potential we have here.

“Australia really does have everything startups need to succeed, and I can’t think of anyone better than Malcolm to make innovation and entrepreneurship a priority for Australia.”

“As an entrepreneur and business owner, I look forward to seeing a Prime Minister who understands the importance of innovation in making Australia globally competitive,” Jo Burston says.

“We need to see STEM and entrepreneurship subjects made compulsory in schools to ensure Australian children are not left behind by the rest of the world.

“Business legislation is vital too: I would like innovative technology-enabled and driven companies to be given better research and development opportunities and tax incentives, as well as the abolishment of payroll tax.

“The NBN must also be completed as soon as possible to ensure that Australian businesses are able to connect and collaborate with each other, no matter where they are based.”

“For the first time in a long time, we might have a PM who sees the bigger picture,” James Moody says.

“That we are entering an age of disruption where the fast eat the slow and the world is hyperconnected.

“Mr Turnbull – with your background in both business and communications, can you please release the shackles on small business and technology to help Australia compete globally in this new world?”

“As someone involved with startups I love the idea of someone who has both entrepreneurship and political experience leading Australia, and Turnbull is a great and probably quite rare example of this blended background,” Julia Clavien says.

“I may have to even admit to giving a little cheer when Turnbull said the words ‘disruption’ and ‘innovation’ in his speech last night. Successful startups by definition innovate to create disruptive change, and it was also very cool to hear the words ‘change is our friend’. Overall I’m cautiously optimistic.

“The announcement has got me and startup friends fantasizing about the NBN again, and if Australia might catch up on internet speeds and all the cool new tech opportunities that opens up.”

“I belive Malcolm Turnbull is the first Australian Prime Minister with a technology background and he is also a rare example of a PM who has personally built and invested in Australian businesses.

“Malcolm Turnbull is also well placed to understand the reality that high-growth tech companies are integral to our future economy.

“He has talked about pursuing innovation, competing globally and ‘seizing the day’ and I certainly look forward to hearing a lot more detail from him and his team in the next few months about their plans in this area.”

“I’m incredibly excited to see what he might do,” Niki Scavek says.

“The biggest thing is tech literacy – we finally have a PM that truly understands tech and startups and the big world that we live in.

“I’m most optimistic about the way he could help change education to adjust it to the 21st century and teach our children the STEM skills they’ll need to get jobs in the future.

“Every single issue he understands more deeply. Just acknowledging the reality and not denying it, that’s the first step to changing something.”

“I saw him speak at an event a few weeks ago and he was very focused on the right thing. He spent half of the time talking about women in tech and studying STEM, and that’s probably the biggest challenge we’re facing,” Rebekah Campbell says.

“The whole perception of a career in tech for young girls needs to be shifted. Everyone is talking about coding in schools and if anyone is going to do it from that side of politics I think Malcolm Turnbull is the right person.

“Labor has been so engaged over the last six months and has developed awesome policies in this area. Malcolm Turnbull is saying the right things and has the right background, hopefully he’ll spend as much time on it as Labor are.

“This will be our first PM that comes from a tech business background and lives comfortably on the internet that is changing the world around us,” Phil Morle says.

“I am hopeful that we will see policies shift to mobilise the talent in this country to exploit this. I am expecting what startups do to become a more important part of how the government is run.

“Abbott was irrelevant to the startup and innovation community and generally created a negative image for the country that set us back.”