The five best things about failure 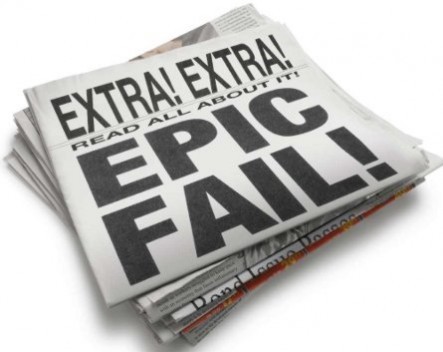 Failure. It’s an ominous word that comes with plenty of negative connotations. Especially in Australia where success is celebrated and failure frowned upon. Just look at the adulation heaped on successful sportspeople compared with the ire directed at those who don’t meet expectations, like the Australian cricket team.

But for many in Australia’s entrepreneurial community, failure is not a scary concept. In fact, it’s embraced and welcomed for the learning opportunities it can provide, lessons that can take entrepreneurs further down the road to success.

As such, they say the attitude to failure in Australia needs to change so that entrepreneurs and start-ups are encouraged to take risks without the fear of being stigmatised if they fail.

It’s the most obvious thing to take from failure. If you or someone else has done something wrong, you know not to do it again.

Birkby, Stone, Eckersley-Maslin and Matthews all highlighted this as a key positive of failure.

“Failure is an opportunity to learn,” says Stone, while Birkby says: “Success can only teach us what works. Failure teaches us what doesn’t.”

Matthews says mentors at Innovyz Start take part in a panel discussion to talk about their worst mistakes and what they learned. “As people ‘go public’ about their mistakes and failures, others learn how to recognise the patterns and not make those mistakes themselves,” she says.

Eckersley-Maslin points out that “if you fail and lose a couple of hundred thousand dollars, you won’t do that again”.

As the old saying goes, what doesn’t kill you makes you stronger.

Birkby says failure builds emotional intelligence and intuition, with the “street smarts” fundamental to being a successful entrepreneur coming from experience.

“Those experiences are a multitude of varying degrees of success and failure, both of which teach us in different ways,” he says.

Eckerlsey-Maslin says failure teaches people to be humble about success. “We’re great at supporting the underdog in Australia, but we do have a problem with the `tall poppy syndrome’. Being successful can be confused with arrogance.”

He adds that failure teaches people not to fear failure.

Stone says while failure is “inevitable”, it’s part of the scientific process of discovery and should be embraced by business for the same reason.

Matthews notes that failure can reveal a lot about individuals in a team.

“When something doesn’t turn out as planned, does your team spend time analysing the data and asking why this happened, or shifting blame from person to person?” she says.

“Failure can be a crucible that enables you to learn the truth about people sooner, rather than later when it’s more difficult and expensive to make changes.”