The importance of gender diversity in tech: Why the “merit” argument doesn’t stack up 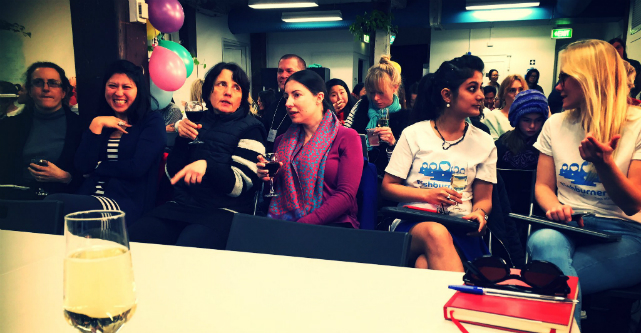 Last month, our team at BlueChilli won a “Merit Award” for innovation, recognising our work supporting startups across Australia.

As we stood smiling for the cameras, certificate in hand, it dawned on me – “I thought merit was only for men!?!”

At least that’s what our politicians keep telling us.

On ABC’s Q&A recently I asked the new federal assistant minister for innovation about the dwindling number of women in government (the worst levels we’ve seen in 20 years) and the impact this will have on Australia’s innovation agenda.

The response? Well, it’s because of merit. The argument made was that all the men currently in government were chosen on their merit, that women either didn’t put their hand up or couldn’t compete with their male counterparts, and that the electorate is to blame for meritorious women losing their seats to blokes.

It goes without saying I was pretty unimpressed with the answer. But what’s really concerning is that it completely missed the point. That is, a failure to engage women in leadership positions is a massive risk to our economy, and indeed our nation’s future prosperity.

Gender equality isn’t just a “nice to have”, it’s a global economic imperative.

The research is unequivocal. Diverse leadership teams result in greater innovation and better bottom lines. When the people charged with coming up with new ideas and solving problems all look the same, the ideas and solutions are inevitably sub-optimal.

By contrast, diversity at the table forces people to challenge their assumptions, consider different perspectives and ultimately drive toward more creative and profitable outcomes. Gender is of course just one element of diversity – but it’s a crucial one. This is true for the corporate sector, for the community and for cabinet.

Yet despite the obvious value derived from gender equality, here we are in 2016 and women remain grossly under represented at the nation’s decision making tables. There are more CEOs named Peter on the ASX 200 than there are women.

And there are undoubtedly more blue ties in cabinet than there are females. In short, our country is still dominated by the decisions of men.

So how can Australia achieve our goals as a global innovation leader when at least half of the population is missing out on the action? It’s simple – we can’t.

It seems our politicians are not ready to proactively attack this problem (quote: “we’re not big on quotas”) but fortunately the world’s natural problem solvers appear to be up for the challenge.

That’s right, the entrepreneurs are on the job. And they need to be. Because as governments and corporates across the country are lining up to ride the innovation wave, we need to take action right now to ensure we don’t grow a new technology-driven economy that leaves women behind.

To date, the tech startup space has been one of the worst environments for women. In Australia, less than 5% of funded tech startups are founded by females.

With the industry dominated by men in t-shirts and sneakers playing ping-pong, even those women considering a tilt at building their own tech startup would be right to wonder, “is this really the place for me?”

But in due credit to the entrepreneurial community, this is a problem that has now been acknowledged and key players are working to fix it.

Australia’s highest-profile tech success story Atlassian last year appointed Aubrey Blanche as global Head of Diversity who is working to increase the number of women employed across the software company, outside of just the HR and marketing teams.

At the grassroots, significant efforts are being made to encourage more women into the startup community. This month two female founder hackathons were held simultaneously in Sydney and Melbourne, with hundreds of women inspired to share their ideas and have a go at “getting started”.

At BlueChilli, we have been overwhelmed with interest from supporters and entrepreneurs in our new SheStarts accelerator. This has driven us to build a much larger program, now in final stages of development with applications set to open soon. The message from women across the country is clear – they’re ready to take off, they just need help finding the runway.

It’s important to recognise the huge efforts that have been made over many years by some key leaders in this field.

Organisations like Springboard, Scale Investors and Heads Over Heels have been leading the charge to drive greater investment in female-led companies, and the team at iAccelerate in Wollongong have shown vital leadership in bringing more women into their program.

It is these pockets of light we need to celebrate and build upon right across the ecosystem, so that one day, women-specific programs may no longer be required.

Of course, some people would argue programs specifically for female entrepreneurs – like quotas – are counterintuitive; that they set up a precedent for giving women special treatment that doesn’t exist in ‘the real world’.

Such people suggest that if women want to compete on the global stage, they need to put up their hand and just do it – pitch on their ‘merit’ so to speak and get on with it.

To those people I’d say, the merit argument doesn’t stack up. Just look at our government.

If we want to get more women launching big successful tech companies (and as illustrated, we can’t afford not to) we need to create the spaces for them to get started and build an ecosystem that is even remotely appealing to women.

This doesn’t mean changing all our logos to pink and hosting cupcake days. It means putting our money where our mouth is – to target female founders, back them with the right support, mentoring and investment, and showcase their success stories to the world, lighting a path for others to follow.

We’ve got a big job to do, but it’s a job worth doing. It’s time to leave the merit card at the door.

This article was first published on the BlueChilli blog.