The Telecom Computerphone: How poor execution can kill a good business idea 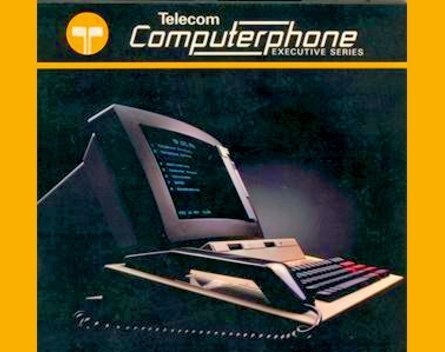 Once upon a time, a very long time ago, there was a publicly owned monopoly known as Telecom Australia. It was an institution built on the age-old principles of bureaucracy, gold-plated waste and designing new products in committee meetings.

In this bygone era, this great publicly-owned monolithic bureaucracy noticed that a few leading typewriter brands, such as IBM and Commodore, along with a new start-up called Apple, were beginning to produce a new kind of office appliance called the ‘microcomputer’.

These strange boxes – later known as IBM compatibles and then desktop PCs – were appearing on offices desks across the land. The wise bureaucrats of Telecom said “me too!”

There was a slight catch, however. While they were allowed to sell (or, more precisely, lease) telephones, selling computers went way beyond their charter. Fortunately, there was nothing preventing them from selling a phone which happened to also have a whole desktop computer in the same box. So the Telecom Computerphone was born.

(For those of you who think Old Taskmaster is spinning a yarn and no bureaucracy would have been dumb enough to actually build such an abomination, click here for a photo.)

So in the mid ‘80s, Telecom, in partnership with British mainframe-company ICL and Sinclair (maker of the ZX Spectrum), were shipping these computers – I mean phones – off to the antipodes. Internationally, they were marketed as the “One Per Desk” and the “Merlin Tonto” (“tonto” being a Spanish word roughly translating as “stupid”).

Now, clearly there is a market for devices combining computers and telephones. After all, if you have a smartphone in your pocket or bag, you own a device that effectively does just that.

In fact, you could say the concept was visionary – 20 years ahead of its time. But it wasn’t the concept so much as the execution that killed this beast.

You see, instead of using DOS like most computers of the day, some bright spark in a meeting decided to develop a new operating system from scratch so dumb office workers could easily find the app or file they needed by looking through menus.

In fact, it was compatible with no other computer built before or since. Aside from a few built-in productivity apps, those easy to use menus had no other apps to choose from!

Oh, and instead of having a floppy disk drive to store files on, like most computers of the day, the Computerphone saved its files on 8-track cassettes. As in the kind that used to get their tape jammed in the 8-track players of 1970s cars, except on a miniature scale.

This meant you couldn’t save a file and then stick it in the disk drive of the IBM PC or Apple on the next desk. Meanwhile, the miniature size of these cassettes meant you couldn’t even record the Eagles over them and play them in the 8-track player of your dad’s old 1973 Holden Monaro.

As for the phone itself, the phone handset itself was the width of a computer keyboard, making its size perfect for any oompa loompa in Willy Wonka’s chocolate factory who needed to make a business call.

While the underlying concept was innovative and arguably well ahead of its time, it will probably come as no great surprise to anyone (except for Telecom’s senior bureaucrats of the day) that a computer with no programs will generate next to no sales.

So do you have an innovative idea for a new technology or business model? Make sure you plan its execution as well as the basic concept – or else you could end up with a tonto (or should that be a “Tonto”) product.