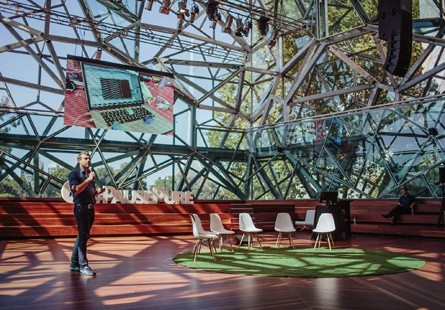 “We want to make it as exciting and easy as possible for people to find someone who can take you to the next level,” Hedon tells StartupSmart.

By colliding the creative, tech and business worlds, the festival strives to create a “platform for collaboration”.

Over the last five years, Pause Fest has hosted and launched some of the most successful startups to hit the market such as Canva and Zero Latency.

Since featuring at the festival, Zero Latency has gone on to secure more than $1 million in funding as the world’s first free-roam, multiplayer virtual reality gaming experience.

Hedon says Pause Fest is characterised by its buzzing community of change-makers, from major Silicon Valley startups through to local students seeking inspiration.

At this year’s festival, Hedon says gender balance has been a key objective.

“We have made sure that there are equal, if not more, women in a conference,” he says.

One of the key presenters will be San Francisco-based Girls in Tech founder Adriana Gascoigne, who will appear at multiple Pause Fest events including the Business Breakfast.

To get the most out of the event, Hedon encourages those interested to check out the schedule and find their favourite speakers.

“There are about 23 events you can attend with amazing content,” he says.

Pause Fest features a range of ticketed and free activities, presentations and workshops.

Festival-goers can pick up a range of new skills and advice from some of the world’s leading innovators, including Hyperloop Transportation and Crumpler.

“These are top people from the industry that are offering you free services,” he says.

Opportunities to pitch and connect

Free events include a showcase bringing startups from across the country to the Atrium at Fed Square, which will also feature national broadcasts and the opportunity to do a live walk-in pitch to an Australia Post judging panel.

To encourage people to network, Hedon and his team have incorporated activities like the Escape Room and Zero Latency where strangers can come together and interact in gaming experiences.

Pause Fest started as a small side-project for Hedon.

“I’ve never run a festival before, I’m a DJ so I ran and played at a lot of parties,” he says.

Last year in its fifth running, more than 12,000 people attended Pause Fest, and Hedon expects the crowd to be just as big this February.

He decided to focus his efforts on growing the conference after seeing the outcomes arising from the convergence of the tech and creative industries.

“Every year I was curious to see what the next year would hold, so every year I would add to it and change it,” he says.

“People are still confused about what we do and why we do it, but innovation is confusing, it’s not pretty and you don’t know what the outcome will be but something amazing and magical always happens at the end,” he says.

Pause Fest runs from February 8th to the 14th in the Melbourne CBD at spaces including ACMI, Deakin Edge and Fed Square.