Toothbrush Direct offers a service to make you smile 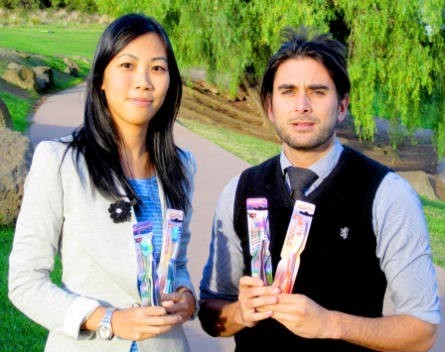 Not many entrepreneurs can say they left their jobs at a major bank to start a toothbrush business. But then Grace Halim and Daniel Bugeja aren’t your typical entrepreneurs.

Halim and Bugeja are the brains behind Toothbrush Direct, which delivers fresh toothbrushes to its subscribers’ doors every month.

The duo talks to StartupSmart about keeping costs to a minimum, their use of six-foot signs to promote the business, and the future of subscription commerce in Australia.

How did you guys meet and what were you both doing before Toothbrush Direct?

Bugeja: We were both previously employed at a big bank with some overlapping time working together. I was working as a project manager and Grace was in online distribution.

It was there that we would discuss how we would both be more suited to life outside the corporate world.

We always believed that our individual skill sets melded well together and, if given the opportunity, we would be rather successful in trying our luck at launching our own business.

I resigned from the bank in 2012 with strong motivation to get something – anything – started up but we remained in contact, still pondering how we could somehow follow our dreams.

How did you come up with the idea?

Halim: Daniel brainstormed a few business ideas – some of which were good, some were not so good.

He rang me one day and said that he wanted to run a company which provided a subscription service for toothbrushes after coming home from his friend’s house – he’d seen mould growing on his friend’s toothbrush.

Like his other business ideas, he asked me if I wanted in. I said, “You know what? This one actually sounds very viable and something I would be proud of being involved in. Let’s do it!”

Every day was spent researching things like how many players there are in the world, in Australia, what it would involve, how to design a website, SEO – the whole lot.

How did you fund the business and what were your start-up costs?

Bugeja: We both had savings from slaving away at the various workplaces we’ve worked at, so naturally our first instinct is to simply fund the entire start-up costs ourselves.

One of our biggest aims when starting the business was to keep start-up and overhead costs absolutely as low as possible.

There was no chance that we would consider loans of any sort as it was important for us to not have many ongoing costs.

Our available resource was time, not money, so instead of outsourcing things we simply learnt them and did them ourselves. The only thing we couldn’t do ourselves, which proved to be our biggest cost, was the design and manufacturing of the toothbrushes.

We wanted our toothbrushes to be the best. Our goal was for a Toothbrush Direct toothbrush to be better than the most expensive manual toothbrush you could find at the supermarket.

To do that we needed to bring in designers and have them work closely with our manufacturer.

Although this was rather expensive, we felt it was money well spent as it ensured we would be bringing the best quality product we could to market.

How many staff do you have?

In line with our desire to keep costs down, we would much rather learn to do something (bookkeeping, for example) rather than pay someone to come in and do it for us.

With that said, however, packing toothbrushes into envelopes is starting to take up a lot of our time so we see a need to start bringing in an extra resource shortly.

How do you promote the business?

Bugeja: We knew going in that, for our business, it’s not so much about promoting our business itself but rather the idea of a toothbrush subscription service.

Having brought the concept to Australia, and being the only ones offering it, our goal is simply to increase the public awareness that this type of service actually exists.

As we are trying to keep costs down, we rely heavily on word-of-mouth, social media and providing information to key members of the public (such as dentists, schools and community groups).

With that said, our list of public places where we have been handing out samples is constantly growing, as is the amount of places we have been ejected from for having a six-foot sign erected.

Anything we can do to make more people aware that a service like ours exists, the better for it.

Bugeja: The beauty of being based on a subscription model is that every month will be the same, if not better, than the one previous.

Although it’s very hard for us to make yearly projections given we are the first company in Australia offering this service, and our growth is linked purely to how many people we can make aware that the service is available, we can make fairly accurate month to month predictions.

This helps us immensely when developing rolling six-week action plans.

What is your point of difference?

Halim: Our whole business model is our point of difference. At the moment, there are no players in Australia offering monthly subscriptions for toothbrushes.

I guess our unique selling proposition (if we had to choose one) would be offering clients the convenience of getting toothbrushes delivered to their house at a very low cost to them.

They no longer have to remember when they last replaced their toothbrush and make multiple trips to the supermarket when they forget to get a new toothbrush on that very first trip.

And like other online businesses, we have very low overhead costs so that we are able to offer very competitive pricing to our clients.

What has been your greatest challenge and how did you overcome it?

Halim: I feel like our biggest challenge is probably getting acclimatised to the differences in each other’s strong working styles and ways of perceiving things.

We are both quite stubborn and sometimes we try too hard at making the other see our point of view. We have to do this without wanting to kill each other.

Over time, we try and look at the bigger picture – that we both want to see the company succeed. We have since learnt to communicate better and compromise more.

How do you see subscription commerce changing in the future?

Halim: You constantly hear about how Australia Post is starting to struggle to keep up with the demands of online shopping.

So already, you can see that people are no longer afraid of purchasing items over the internet and they no longer have to shop at a physical store.

We are trying to make getting toothbrushes delivered to you, by post monthly, something that people aren’t afraid of in the future.

We hope that people no longer have to go to the supermarket or the chemist to buy new toothbrushes, which are often overpriced anyway.

More and more, people are working longer hours and are becoming even more time-poor.

Having things done for you automatically (the basis of subscription-based models) is something that will become more prevalent in the future as people place more value on their time.

How do you intend to leverage the growth of sCommerce?

Bugeja: A key element that we considered when we started Toothbrush Direct is that if we are offering a subscription service, it needs to be based on a product that has a definite lifespan where we know when a customer is due for a replacement – rather than simply guessing.

We don’t like the idea of a subscription service where the customer doesn’t actually use up all of their products each month and ends up with a stockpile.

We don’t see that as being very customer-centric, with the subscription more tailored to the companies’ needs rather than the customers’.