$US100,000 up for grabs at PayPal and Braintree Sydney Hackathon 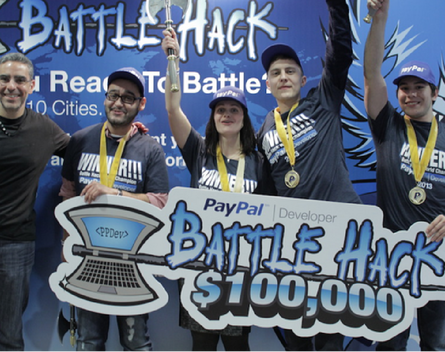 The hackathon is part of the global BattleHacks competition that visits 14 cities around the world before culminating at the World Finals event in November.

During the Sydney Battle Hack, developers will be tasked with building a mobile application that solves a local problem of their choice and incorporates the PayPal API or Braintree SDK.

Developers can compete as individuals, as a team or find people to collaborate with on the day, with a maximum of four people to a team.

The winner of the Sydney Battle Hack will be flown to the finals at PayPal’s headquarters in Silicon Valley to battle it out for the $US100,000 prize and “battle axe” trophy.

The Sydney judging panel for the Sydney Battle Hack will include John Lunn, global director of the PayPal Developer Network, and influencers within the Sydney tech scene to be announced in the coming weeks.

John Lunn, global director, PayPal and Braintree Developer Network says they are excited to be able to bring Battle Hack to Australia.

“Battle Hack is designed by developers for developers. We see it as a way to reward the best and brightest developers,” Lunn says.

“Additionally, we hope to change the lives of the winning team through the prize money we offer, whether it’s helping a sick relative like one of our Moscow winners did or building their own business.

“Unlike many other hackathons, we aren’t looking to take equity in their companies or influence their work in any way.”

The first prize up for grabs at the 2014 Sydney Battle Hack includes flights and accommodation to the World Finals in Silicon Valley, and a chance to win the grand team prize of $100,000 USD.

For more information and to register, visit https://2014.battlehack.org/.