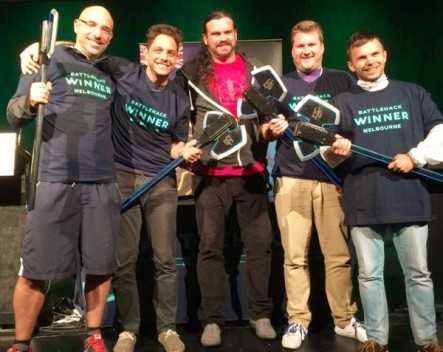 The team that won last year’s BattleHack competition will once again take on Silicon Valley for the chance to win $US100,000.

Christopher Michaelides and his team, who won the 24-hour hackathon in 2014 for an Internet of Things storage solution, sailed to victory on the weekend with a wearable tech product designed to increase road safety for cyclists.

NIGHTRIDER is a jacket fitted with indicator lights that automatically turn on when a cyclist slows down or lifts their arms to signal they are about to turn.

The team was made up of John Lyons, Andrej Griniuk, Tom Frauenfelder and Christopher Michaelides. Andrej, Christopher and Tom were past winners from BattleHack Sydney in 2014.

Michaelides says while taking part in BattleHack Sydney gave his team members some confidence, he did not expect to win this year’s hackathon held in Melbourne.

“We knew that we would need to be great on our idea execution because it would be tough to award a team the win two years in a row,” he says.

“Plus Melbourne Battlehack is a whole different bunch of hackers as well, with fresh skills and ideas.”

Michaelides says he is looking forward to representing Australia in the BattleHack World Finals.

“We were disappointed in not winning the world finals last year, but we are going to give it our all in November in Silicon Valley,” he says.

“We are excited to head over to Silicon Valley as well because it is like mecca for startups, and the atmosphere and the vibe is great.”

Michaelides says the key to winning the Australian hackathon was a product that resonated with the judges and could easily go to market.

“They could see that there is an issue with a communication breakout between cyclists and car drivers on Australian roads, especially at night,” he says.

BattleHack Melbourne was judged by a number of industry experts including the director of StartupAus, Glenn Smith, and the founder of TechAu, Jason Cartwright.