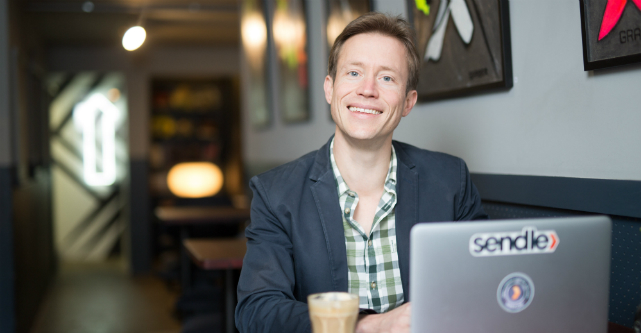 When Sendle founder James Chin Moody was offered a $1 million investment in his early-stage startup, it came with one firm condition.

This was a year and a half ago, when Moody was on the hunt for seed funding to help build his tech-based delivery company.

From the very beginning the Sydney entrepreneur wanted his business to have a firm purpose and to be achieving a social good, and he was in the process of turning Sendle into a B Corporation, a certificate given to a company that has a positive impact built into its operations.

But the investor had other ideas, offering to chip in $1 million – a huge amount for an early-stage tech company – on one “very firm” condition.

“We actually had an investor looking to invest $1 million on the condition that we no longer became a B Corp, that we removed all that stuff from what we were doing,” Moody tells StartupSmart.

But Moody says he also wanted his business to be about more than just making money.

“It goes right back to my philosophy around business – there doesn’t have to be a distinction between purpose and profit,” he says.

“The best businesses are the ones who can align their purpose as a business with their business model.”

He says Sendle’s purpose is two-fold: to help Australian small businesses, and to have a positive environmental impact.

“Sendle’s purpose is to help small businesses thrive through delivery that is simple, reliable and affordable,” Moody says.

“And we’re Australia’s only carbon neutral delivery service. It’s very deeply ingrained in the business that we are here for a purpose, and we’ve tried very hard to align our purpose with the business model.”

To hold the business accountable and ensure purpose is embedded in all operations, Moody decided to make the startup a B Corporation from the very early days.

And he stood by this even in the face of a $1 million offer, rejecting it and gaining the B Corp certification for Sendle.

“For me it told me that we weren’t on the same journey, that we actually wouldn’t have been aligned. Our whole thing was to align purpose with our business model,” Moody says.

“When we were raising money it was an attraction to positive investors and we found out that it also helped us to find the investors we didn’t want to have. In some ways it was a good test for the sort of folks we wanted in the business.”

And the risk paid off, with Moody eventually closing a $1.6 million seed round for Sendle that year, and a much larger $5 million Series A round earlier this year, while maintaining its B Corp certificate.

“It’s always risky in this game but I think it’s about the journey as much as the destination,” he says.

“If you build something that’s having a positive impact on society, on the economy and on the environment, and you’re creating value then hopefully you’ll also be successful.”

He says all startup founders should think carefully about their long-term purpose and values from the very early days of building a business.

“Companies that build it in right from the very beginning inspire me most of all,” Moody says.

“It motivates you, your team and your customers but it also keeps you honest around what you’re here for and who you’re here to serve.

“And keeping you honest keeps you focused, and that’s the most important thing.”