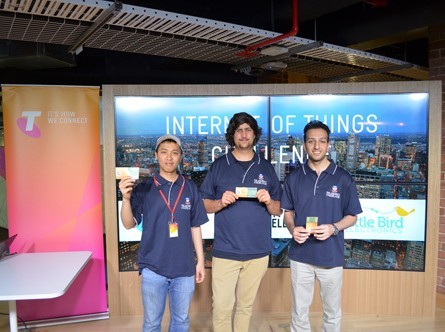 Entrepreneurs, innovators and inventors have come together to transform Melbourne into a “smart city”.

The week-long hackathon-style innovation challenge was the latest effort by the city’s council to encourage digital innovation in Victoria.

A joint venture between the City of Melbourne and Telstra, the Internet of Things-focused challenge asked teams to create a device to improve the life of city residents.

Finalists pitched their solution to an expert panel, with the winning team using data collection sensors to monitor use of play equipment across the city’s parklands.

Council Smart City and Innovation program manager Lorraine Tighe judged the event and says while the Connected Parks team were surprise winners, they were worthy recipients.

“When we looked at it, there was a need for need to understand how the playground was being used,” Tighe tells StartupSmart.

Once installed, the Connected Parks prototype can run on battery or solar power for years and can be retrofitted into existing equipment or installed at the time of manufacturing with little overhead.

City of Melbourne chief digital officer Michelle Fitzgerald says the challenge was part of the city’s ongoing efforts to become a “smart city”.

She said there was plenty of pre-existing infrastructure in Melbourne from which data could be collected and unlocking the potential of those tools could make an immediate impact upon the lives of Melburnians.

“It’s about what we can do now, not what can we do in future,” she says.

“We’re not doing digital for digital’s sake. We’re looking at it as a way to solve real problems for our stakeholders.”

Fitzgerald, who was appointed Victoria’s first chief digital officer earlier this year, says initiatives like the IoT challenge are powerful because they ask end-users to create the product, not counsellors or businesspeople.

She says Melbourne has a proud and vibrant startup culture and the city welcomes the federal government’s recent innovation statement.

“It is further endorsement that these startups are important and it gives them a platform to mature.”