Can you keep a secret? Lessons for startups operating in stealth-mode 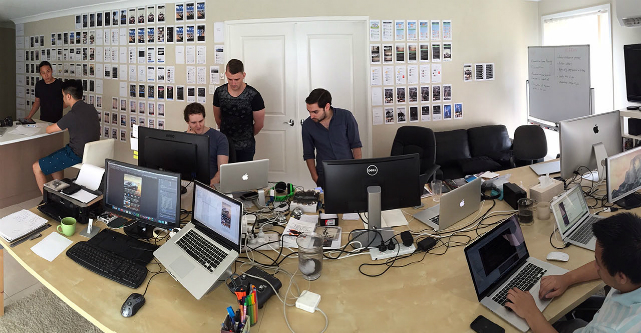 The Amity app was built in secret in a Brisbane sharehouse. Source: Supplied.

Getting validation from customers, pitching to investors, and getting as much press as possible is usually the go-to approach for startups looking to launch a new product, but there are some startups that prefer to stay in the shadows until their grand reveal.

Startups like Zoox, Amity and Unlockd have all employed a ‘stealth-mode’ approach to their products, operating in secret until their launch to stay focused, protect their concept from competitors and build interest in the product.

It’s an approach that has worked particularly well for Zoox, a mysterious driverless-car startup that has seen an almost feverish response from consumers and industry commentators alike, who are eager to learn anything they can about the company and its tight-lipped Australian co-founder Tim Kentley-Klay.

The startup was valued at $US1.55 billion ($2.01 billion) last year after closing a $US50 million ($62.3 million) capital raise from Hong Kong hedge fund Composite Capital, but Kentley-Klay has been notoriously publicity-shy about his startup.

Zoox is aiming to disrupt the automotive industry through its self-driving offerings, and according to media reports, the Californian-based company is expanding rapidly. The company’s website currently features more than 70 job listings across a wide range of disciplines, while Axios reports the company is in talks with Softbank Group about a new funding round that could potentially value it at more than $US3 billion.

Kentley-Klay has also taken to Twitter to post updates on the construction of new Zoox premises — one of the few times he’s spoken of his startup on social media.

Great to see our new digs under construction. pic.twitter.com/Hl5XPTOXc9

Johnny Cheng, co-founder of Brisbane social media startup Amity, launched his startup out of stealth-mode and says he made the decision in order to maintain “relentless focus” on the product — an approach that led to him and his co-founders living in a “hackerhouse” and building their product in secrecy.

After two years of keeping its social network under wraps, Amity launched its offerings in August 2016.

“When you’re a small team trying to pull off the impossible, it really comes down to creativity, courage, and commitment. Being in stealth mode allowed us to create an environment of pure focus,” Cheng tells StartupSmart.

While he admits this secretive approach is “not for everyone”, Cheng says the team “had our vision on day one, and it was just about getting it to work … nothing else mattered”.

Melbourne advertising startup Unlockd took a similarly secretive approach to building its product and co-founder Matt Berriman says while the team was out in the market talking to customers, Unlockd “needed to be quiet on broader communications” until it was “ready to launch with a proven product, in order to give ourselves a competitive advantage”.

“There are not always times when shouting from the rooftops is the best avenue for the business to take, sometimes it’s about remaining quiet,” Berriman tells StartupSmart.

The approach appears to have paid off, with the startup last year securing $30.8 million ($US23 million) in Series B funding, led by Axiata Digital, to fuel expansion in the US, UK, the Caribbean and the United Arab Emirates.

Nicole Reaney, director of InsideOut Public Relations, believes says it’s wise for startups to leverage stealth to their advantage when they are still in their infancy.

“Maintaining a low-key profile while establishing is an intelligent strategy,” she tells StartupSmart.

Reaney says operating below the radar allows startups to get a feel for the market and hone their value proposition before launching their offerings.

“It allows a business to navigate the quirks of its environment and understand its clients and market sentiment. This then allows modifications to a brand proposition before widely publicising your offering,” she says.

While operating in stealth-mode “depends on the business itself”, Reaney says some startups can benefit from establishing a loyal follower base before publicly launching to the world.

“It works well for some clients to tread slowly and build a positive community following who can then shout the brand’s public praises. A company’s most trusted reputation stems from third parties,” she says.

This idea of building a grassroots support movement, rather than seeking publicity and exposure from the media, can be leveraged to build authenticity and a loyal following, Reaney advises.

For startups looking to make this approach work for them, she recommends they “focus on creating loyal brand ambassadors” by providing consumers with “exclusive offerings and experiences” to create a group of customers who “will represent your brand and persuade and inform other consumers on your behalf”.

StartupSmart contacted Zoox but did not receive a response prior to publication.

You can’t sell a secret…