Canberra entrepreneur scores $600,000 on Shark Tank: Three things he learnt from swimming with the sharks 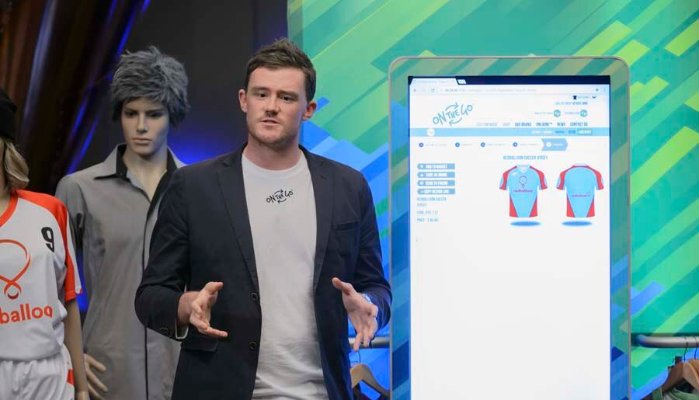 A Canberra entrepreneur has scored the first investment on the new season of Shark Tank, netting $600,000 from three of the esteemed judges.

On the Go founder Mick Spencer was the first contestant to appear on the latest season of the entrepreneurial reality show, and eventually convinced three sharks – Janine Allis, Steve Baxter and Andrew Banks – to back his tech sportswear business in exchange for 30% equity.

On the Go is a purpose-driven clothing manufacturer delivering custom-made sportswear with a client portfolio boasting the likes of Iron Man and Fitbit.

Spencer says the investment serves to close a $1 million seed round in his startup, and that he’s on a mission to empower disadvantaged youths around the world through healthier lifestyle.

The founder entered the tank pitching for $300,000 in return for 10% equity in the company, with the three judges all offering the full amount of money for twice the equity.

After consulting his CFO James Palmer, Spencer made a reviewed offer of $600,000 between the three sharks in exchange for 10% equity each which they eventually agreed on.

The sharks’ investment in On the Go is one of the biggest ever made on the show, and Spencer says he learnt three key things throughout the intense process.

Spencer says he jumped into the tank with a very clear idea of how much backing he needed, what he needed it for and how much of the company he was willing to give up.

“I went in there with confidence,” he says.

“My first priority was to come in and get investment.”

Spencer says he never planned to give away more than 30% of the company, and stayed firm even when Allis counter-offered for 35%.

The sharks then dropped the stake to 33% before finally giving in at 30%.

“Going in there with an outcome and a plan really helped,” Spencer says.

This ensured a deal was made on his terms.

But his knack for negotiation has come through some rigorous learning thrown at him during On the Go’s early days.

“I built a lot of confidence on who to trust, I’ve been burned a lot and lost a lot of money.”

Get the numbers right

In preparation for Shark Tank, Spencer approached some of his existing investors to see what type of questions they may ask.

After noting all of these down, he made sure he had answers for each one.

Having a strong understanding of his equity and cash flow helped him respond well on how his business actually stacks up proved to be most important.

During the show, Spencer revealed the company turned over $1.6 million last year with a cost of goods gross margin of 58%, which in addition to other costs put them at a small loss.

However, with current client negotiations underway, he assured the judges that On the Go would reach profitability by the end of this year.

Reviewing the figures Allis noted that the company though valued at $3 million would make just over $250,000 in profit.

But with Spencer’s planned growth trajectory and ambitious longer-term goals, he was able to demonstrate that On the Go’s infrastructure was built to last.

“We spent the first four years building a really great business and building a foundation that’s really set up to grow.”

When growing a business, Spencer says it’s crucial that founders optimize their time by dedicating efforts to things that actually drive it forward.

At the start, Spencer says he did everything from coding the website to building the invoice.

“Then as you grow it’s important to make note of where the founder’s position needs to be,” he says.

With this in mind, Spencer began putting in place the right team and efficiencies to set his venture up for acceleration.

RedBalloon founder and Shark Tank judge Naomi Simson commended Spencer for researching and investing time early on to establish On the Go’s infrastructure in this way.

“At every level he is using systems to look – and be professional,” she wrote on LinkedIn.

She says other founders should do the same by reviewing how they spend their time and determining which tasks can be streamlined through systems like QuickBooks Online.

“Is there a system or process that could help you do more of the things you loathe?” she says.

Looking back, Spencer says there is one thing he should’ve done during On the Go’s earliest days: get mentors on board.

“There would have been a lot more opportunity for growth in reaching out to smarter people earlier on,” he says.