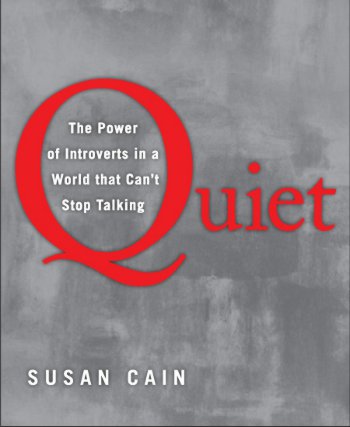 Quiet: The power of introverts in a world that can’t stop talking by Susan Cain.

“If we assume quiet and loud people have roughly the same number of good (and bad) ideas, then we should worry if the louder and more forceful people always carry the day.”

That statement comes fairly early in this book and it’s a theme which sits ominously in the background of every chapter. Research shows neither introverts nor extroverts to have any advantage in intelligence. Both types share a similar IQ profile.

Cain is a self-confessed introvert. She discovered that early, learned to live with it and has now written a book about what is good about it. In Quiet, she argues that society misses out on a lot of good ideas because the extrovert has become the favoured personality type.

It wasn’t always like that. Before the 20th century, it was character that underwrote notions of self-improvement. But from about the time that Dale Carnegie published How to Win Friends and Influence People in 1936, the emphasis shifted to personality.

If the surge in celebrity worship in recent years is anything to go by, we are still on that tack. Achievement has taken a back seat to alleged charisma and it is even possible now to be famous just for being famous.

So entrenched is this trend that even well-meaning parents are known to refer their quiet and studious children to psychologists because they are “just not normal”.

On the contrary, Cain says, it is normal. She estimates that at least a third of us, and as many as half, are introverts. These are people who, like her, are happy to leave the party early, or who comfortably pass on social occasions in order to snuggle up with a good book.

Cain is not dismissive of extroverts. On the contrary, she regularly points out their strengths. The problem, she says, is that by granting so much power to the “loud and forceful” we miss the contribution of more thoughtful and measured minds.

There is some good evidence to support this. Studies suggest that so-called “charismatic CEOs” do not necessarily deliver better corporate performance.

In fact, many produce decidedly poor performance. One of the few parameters on which they tick the box is that they generally have above-average salaries – hardly a recommendation for hiring one.

What’s more, some of the entrepreneurial giants such as Charles Schwab or Bill Gates score high on the introvert scale. Outstanding contributors in theoretical and aesthetic fields include introverted luminaries from Charles Darwin to Patrick White.

Has it become harder for introverts to make a meaningful contribution, let alone succeed? Quiet says the odds are stacked against them.

Modern education increasingly leans toward group learning structures. Even seating in primary schools is now arranged in groups. It means that from an early stage, the loudest or most assertive pupils have a platform to assert their commanding presence.

Cain quotes studies that show peer group pressure influences decisions not just on the basis of encouraging people to go along with the group or to agree in order to be popular; more disturbingly, it influences people’s perception so they lose their ability to be critical of groupthink.

It doesn’t stop at primary school. It goes all the way to tertiary institutions. Cain explores the heavy element of compulsory socialising that is integral to the Harvard Business School. At HBS, being able to clearly and persuasively articulate your point of view is highly prized.

Little surprise such personalities dominate the executive ranks in most corporate environments.

Among the dangers is that extroverts, with their inclination to trade off speed for accuracy, add an element of risk to decision-making.

There is some evidence that the global financial meltdown can be partly sheeted home to the concentration of power in the hands of the thrill-seeking end of the spectrum.

Rather than being ignored, things like fear, uncertainty and doubt can act as useful brakes on risky behavior. They are also things that introverts, with their greater awareness of subtle dangers, are more likely to drill down on.

To that extent, introverts may be a hedge against risk.

Introverts may not be easy to spot. Many develop inauthentic extrovert personae in an attempt to navigate their way through the career shark pool – sometimes to their cost.

They also often display high levels of activity as small children. It is not because they are intrinsically loud and noisy. It is more that they are highly reactive – or sensitive if you like – and therefore respond to fewer stimuli than extroverts, who need more aggressive stimulation to strut their showy stuff.

This might explain the odd connection between extroversion and ADHD. Attention deficit is partly explained by research which shows the ADD brain to be under-stimulated at rest – hence their desire for riskier behaviour in order to lift their level of engagement.

So what can be done with all this?

If you agree that by sidelining introverts, we are missing some good input, then Cain suggests simple things to harness their power.

Don’t, for example, insist that they present their ideas to large numbers of people. Give them a chance to develop their ideas alone or in smaller groups first.

Suggest they build their ideas in writing and communicate electronically with others.

Instead of giving over to total open-plan offices, include cubbyholes and private spaces where people can focus on key projects without interruption.

In some ways, Quiet argues against the current vogue for generating innovation through extensive collaboration. However, Cain says – with classically introverted humility – there is upside in putting both “verts” together.

“Extroverts need to know that introverts – who often seem to disdain the superficial – may be only too happy to be tugged along to a more lighthearted place; and introverts, who sometimes feel as if their propensity for problem talk makes them a drag, should know that they make it safe for others to get serious.”

Such acknowledgment might not lead to immediate equality in salary levels, but it suggests both sides can help each other. If only the extroverts would shut up and listen for a while.