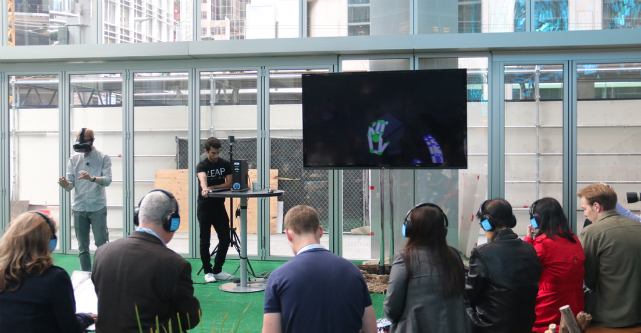 Tech giants like Stripe, Slack and Leap motion are changing the world as we know it, all from the centre of the startup capital of the world Silicon Valley.

During an innovation tour in San Francisco, leadership teams from the tech powerhouses shared insights into what life is like on the bleeding edge of technology.

Here are four key insights from innovators in this space.

1. Commercialise a solution that has helped you

After a few false starts in game development, Slack co-founder Cal Henderson says the company they have today with over 600 employees from around the world came by building a solution that helped its own teams’ work lives simpler, more collaborative and productive.

Through a series of glitches, teams relied on what is known as Slack today to communicate, manage projects and celebrate wins with each other.

“The average Slack user is logged on 10 hours a day,” she said.

Pearce says the reason Slack has become so popular is that they are building solutions to enable people to do their jobs better.

“Work is often complicated and chaotic,” she says.

Referring to research from the McKinsey Global Institute, Pearce says nearly 50% of time at work is not spent on tasks people are paid to do.

Pearce says on average, a company will use more than 900 applications, so Slack has made it a mission to resolve the pain and “friction” in their customers’ working lives.

“A lot of what we’re trying to do is optimise the way people work,” she says.

“Removing that friction enables people to be more productive. Quality and craftsmanship are two of our biggest values.”

3. Aim for a global impact

“The secret of Stripe’s product is one, this focus on global expansion, letting Stripe businesses exist in more places,” he says.

Driven by a keen interest in enabling entrepreneurs worldwide, Collison says the second part of their secret is a focus on “higher value tools” that solve more problems.

In line with this, Stripe chief business officer Billy Alvarado says the burgeoning access to mobile devices is leading to a new era.

“In 2020, 5 billion people will have phones on their hands, which opens up the possibility for disruption and innovation,” Alvarado says.

Leap Motion hit a major milestone this year with the launch of its VR software Orion.

With apps like Blocks, the company is breaking new ground with just how far hand-tracking tech can go in the domain of VR.

The ability to create, move and shift virtual objects is a powerful tech advancement that will see Leap Motion used in a wide range of industries, from education through to science, says its chief of staff Caleb Kruse.

“Imagine if I could hold the galaxy in my hand and get an idea of how it works,” Kuse says.

StartupSmart is attending Dreamforce in San Francisco as a guest of Salesforce.