From hating life to launching a startup: How Angela Liang discovered Lustr 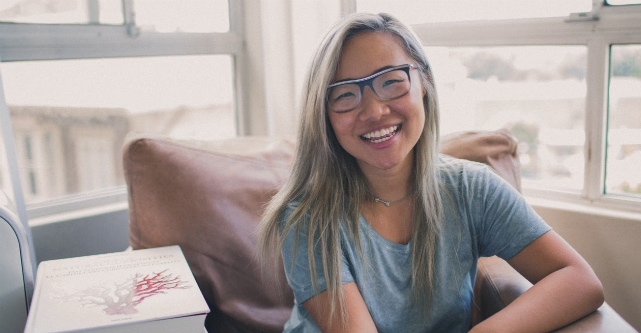 When Angela Liang took a break from corporate life to pursue more creative interests in Sydney, she had no idea she would end up launching her own tech startup.

“I used to be in mergers and acquisitions in the first part of my career, I was a typical Asian nerd,” she tells StartupSmart.

“I went into banking in Hong Kong, got over it in three years.

“I pretty much hated my life.”

This prompted Liang to take some time off and soon she stumbled into an industry that has always fascinated her.

“I ended up getting into fashion completely by accident,” she says.

After helping a friend with photo shoots “for fun”, Liang’s work started to get noticed and soon she entered a new career.

“I realised people kind of like what I’m doing so I started hustling and reaching out to people in the industry, I managed to start shooting full-time within two months,” she says.

During this process, Liang worked closely with up and coming designers and she started to uncover some pervasive problems.

Many of the designers she met struggled with production and marketing costs as they tried to get noticed against big brands.

“No matter how big [the designers] were or how long they were doing this, I just kept hearing the same problems,” she says.

“Many are a one-man band, they’re trying to do everything.”

Using her business acumen, Liang would offer advice and support over coffees to these “creative geniuses” but knew a better solution was needed to save this market.

“Even if they’re super talented and people love them they’re just not getting seen,” she says.

And so sparked the idea for Lustr, a platform for emerging designers to connect with an online community, where they can be intelligently matched with customers, gather insights on collections before launching into costly production and promote their own stores.

“In a nutshell, it essentially matches shoppers with emerging designers that suit their style,” she says.

Lustr is not a marketplace, rather a place for people to create style-sensitive profiles that connect them with new designers.

Users can be matched against categories like “minimal”, “glam” or “casual” and can also feed in additional data for a smarter match.

“Literally, you put in your gender, age group, the kind of products you’re interested in,” she says.

“Once you enter that and you create your profile you can then look at more specific things like certain colour palettes, ethical practices or options for customisation.”

The driving force of Lustr will be the community it creates for designers to communicate and interact with customers, and where shoppers themselves can play an influential role in the shaping of the local designer market, she says.

“If they’re releasing certain [items], they can ask what colour you’d like to see it in. That way the shoppers that have already matched to the designer’s style can give their sentiment.”

Find out what happens in part two of Angela Liang’s story, coming out next Monday.