Hiring for a start-up 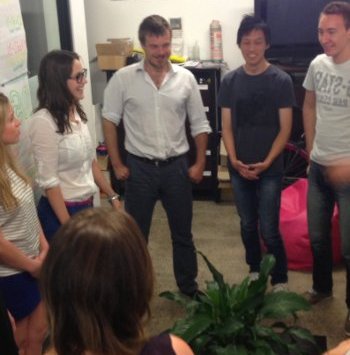 I’ve run a start-up for a couple of years now and ran my own music company for eight years before that.

Anyone who followed our progress would know I’ve made a few hiring mistakes in my time: we had a 100% staff turnover in the first year! Yet, after a rough start, I’ve assembled one of the best start-up teams around.

Hiring team members at a start-up is very different to hiring for a corporate or even for your own business. My music company had a team of eight at our peak, so you’d think I’d be pretty good at hiring by the time I got around to my second company. It doesn’t follow. Hiring is very hard and when you find you’ve made a mistake, letting someone go is even harder.

When I had my own business, it was sometimes easier to accept an underperforming team member than it was to make a change.

But, once I had a start-up, I was spending other people’s money to achieve something in a limited period of time. I had to be much tougher.

Rather than keep churning through team members – a huge distraction, terrible for company culture and a horrible experience for everyone involved – I focused on improving my own performance at hiring the right people in the first place.

The rate at which people we hire work out is still only about 80%. My mentors run major companies; they have hired hundreds of people.

When I ask about their success rate, most come up with a figure between 80-90%. Maybe I’m not doing so badly.

Here’s some of what I’ve learnt:

The most important thing to look for in a start-up team member is the ability to MAKE THINGS HAPPEN.

In a corporate or less intense environment, it’s okay to set a bunch of targets and then come up with a list of reasons why something wasn’t possible. Maybe even write a report and present it at a staff meeting.

In a start-up there are two meaningful outcomes: success and failure. No matter why a target falls through the cracks the outcome is failure, which is no good for the company.

The ability to make things happen has nothing to do with intelligence – I’ve found that even the smartest people procrastinate or buckle under pressure.

So when you’re hiring, always look for examples of times in the past where they had an ambitious challenge and overcame barriers to achieve.

The next thing to look for is creativity and intelligence.

As the founder, you always think your ideas are brilliant – if you didn’t then you never would have started this crazy thing. I soon learned that my first ideas are often wrong and it’s important to surround yourself with people who are passionate about your product, smart and creative.

The whole team works together to strategise major business challenges and design the product. More importantly, each member of a start-up runs their own department: for example, there’s not a whole team on search – there’s one guy.

There’s one community manager, one retail engagement person, and each of these people are essentially running their own companies within the start-up.

So they need to strategise and make lots of smaller decisions about the best way forward. You’d better ensure they’ll make the right decisions; that they have the passion and aptitude to strive for an awesome outcome.

Hire slowly and methodically. Almost every time I’ve rushed the recruitment process or hired for the wrong reasons (like someone else told me we needed someone quickly) I’ve made a mistake.

I know everyone says to do this but it’s easy to get excited about someone and forget. Then when they don’t work out everyone asks me what their references said, and it’s embarrassing to admit I didn’t check.

Ask lots of different people to interview a prospective new team member; obtain a range of perspectives. I’ve learned which of my advisors are tough and which ones tend to like everyone. I listen to the tough ones. We ask candidates to complete a test before they join – no matter whether they’re an engineer or a community manager.

By giving a protective hire a list of questions and evaluating how they approach the answers you can see how creative and smart they are, and you also discover if they have a problem getting things done on time.

When you do make a mistake (and you will), act fast.

If someone is not right for us I generally can tell in the first few weeks, and have been pretty good at acting quickly. It’s always a morale-breaker when the team loses a member but you can’t afford to have an underperforming person hanging around, bringing down the standard.

So, that’s my summary of what I’ve learned through the trial and error process of putting our team together.

I’m happy to report that we now have one of the most passionate, creative, smart and productive start-up teams around. A start-up is a mission though a jungle.

You don’t want people who’ll sit around hypothesising: you want warriors who’ll get out there and try things; people whose drive and ambition will overcome anything.

When I think back to people who joined in the past and didn’t work out it’s generally because either they were not the right cultural fit or were unable to make things happen.

Often, these mistakes stemmed from my rushing the recruitment process.