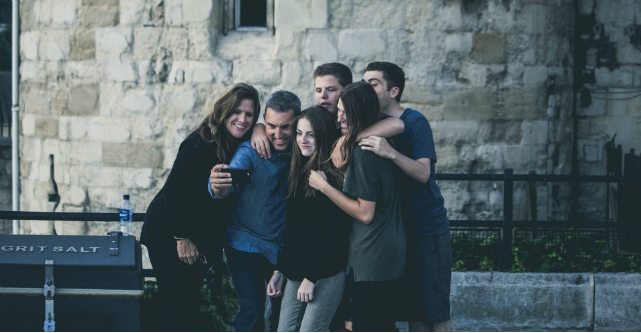 While Facebook still looks unassailable as the king of the social media world, Snapchat has emerged as the scrappy younger cousin with a mind of its own and features that younger users can’t get enough of.

Snapchat lenses and filters have infiltrated popular culture and a lot of what is driving its popularity is the sheer fun of the app.

While Facebook has become the place for family and friends to keep up with each other on a day-to-day basis, sharing news, views and opinions, Snapchat has become the fun, breezy platform that allows people to be silly and creative.

A good example of the fun people are having with Snapchat is the viral video of an American mum using Snapchat lenses to make a good-natured complaint to US department store Kohl’s.

The video is absurd and funny—very much in keeping with the Snapchat ethos.

This obviously appeals to young people but it’s also a very attractive factor for anyone who’s sick of seeing their news feed endlessly clogged up with news (real and fake) and current affairs.

Snapchat is a bit of fun in a world that can seem pretty grim.

According to Statista, Snapchat has tripled its average active daily user numbers in the past two years, going from around 50 million in March 2014 to 150 million by June 2016.

But the numbers are still small compared to the gargantuan numbers racked up by Facebook, which has something like 1.8 billion daily active users at last count.

Snapchat’s surging popularity has Mark Zuckerberg’s team looking over their shoulders and rolling out their own attempts to keep up.

Snapchat-style features have been adopted or adapted across Facebook, Instagram and WhatsApp, with tech publication The Verge even documenting via timeline the amount of times Facebook have gone to the Snapchat well for inspiration.

In fact, Facebook made a move to acquire Snapchat in 2013, but Snapchat’s founders, Evan Spiegel, 26, and Bobby Murphy, 28, knocked back Zuckerberg’s astounding $US3 billion ($4 billion) offer.

Rejecting the move is starting to look like a wise move as evaluations of Snapchat’s worth are now in the ballpark of $US30 billion ($40 billion).

It’s a remarkable story for an idea that started off as a Stanford University class project and which received fairly lukewarm responses at first.

In an article written two years ago for Forbes, JJ Colao signalled the threat Snapchat posed to Facebook:

“Snapchat represents the greatest existential threat yet to the Facebook juggernaut. Today’s teens have finally learned the lesson their older siblings failed to grasp: What you post on social media–the good, the bad, the inappropriate–stays there forever.”

Colao details the incredible tipping point moment in Snapchat’s story, when it went from a barely noticed app to next big thing among American high schoolers:

“But that fall Snapchat began to exhibit a pulse. As user numbers approached 1,000, an odd pattern emerged: App usage peaked between 9 a.m. and 3 p.m. school hours. Spiegel’s mother had told her niece about the app, and the niece’s Orange County high school had quickly embraced Snapchat on their school-distributed iPads, since Facebook was banned.

It gave them all the ability to pass visual notes during class–except, even better, the evidence vanished. Usage doubled over the holidays as those students received new, faster iPhones, and users surged that December to 2,241. By January it was at 20,000; by April, 100,000.”

The Snapchat demographic and its positioning as a fun app makes it very attractive for brands and businesses looking to target younger users.

If your business is trying to appeal to younger consumers, you should be on Snapchat, or definitely investigating how you can make it part of your social media and broader marketing strategy in 2017.