Business cards evolving as they refuse to die 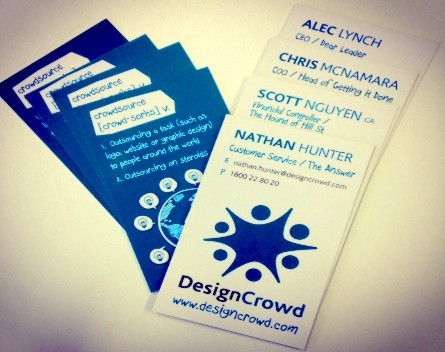 As the world goes digital and businesses embrace the opportunities presented by features such as the cloud and responsive website design, there’s one old-school business tool that’s refusing to die – the business card.

A recent survey of 1000 Australian businesses by online design marketplace DesignCrowd has found 88% of Australians still hand out business cards when they meet new clients.

And of those receiving cards, 70% either immediately enter their details into their smartphone or keep the card in a rolodex.

Recognising the value of a business card, businesses are seeking out good designs to stand out.

DesignCrowd says in a statement that it saw a 357% increase in business card design projects in 2013, making it one of the fastest growing categories on the platform.

Founder and chief executive Alec Lynch told StartupSmart that while people are still including traditional information such as name, title and company logo, some are dropping references to physical addresses in favour of websites and where to find them on social media. Some are also including features such as QR codes.

“What we see is that even businesses that are predominantly online, like our own, we still meet and conduct business offline.”

Lynch says he think most people in business realise that if they go to a meeting with clients or investors or suppliers and they forget to bring a business card it can be “embarrassing”.

“Not having one can also look unprofessional,” he says.

Lynch says his team at DesignCrowd all have business cards and he encourages them to include a humorous title for themselves alongside their official title.

“Mine is ‘Head Honcho (self appointed)’ and another ‘Dear Leader’.”

Lynch says one of the more unusual was a card for someone in the US who wanted a card to hand out to attractive women he met in bars.

Earlier this year we looked at the “dos and don’ts” for what you should have on a business card.