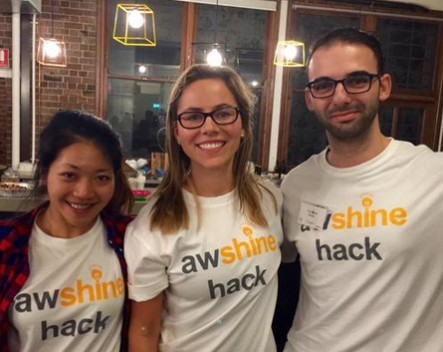 Julia Clavien’s team were the last to form and last to pitch, but eventually finished the AWShine Diversity Hack in first place.

The weekend-long hackathon was run by Amazon Women Shine and saw teams tackle a problem, formulate a solution and develop beta in the space of 48 hours, with an emphasis on promoting and encouraging diversity.

The event was open to all genders, but special priority was given to female entrepreneurs and hackers. Each team had to have a gender mix and organisers say there was a 50-50 split between men and women.

Clavien’s success seems to prove the effectiveness of what AWShine are trying to do. With a background in web development and IT consulting, this was the first hackathon that she has attended.

The weekend event was promoted as a Diversity Hack and strived to ensure women were welcomed and encouraged to participate.

The hackathon’s focus on diversity made it seem more accessible for women, Clavien says.

“It had an open feel, and having that diversity focus makes it seem less intimidating,” she says.

“It had a diverse feel and there was a very good and balanced turnout.”

An online marketplace for copywriters

Clavien and her two teammates, May Thu Kyaw and Chris Iona, pitched CopyConnect, an AI copywriting proofreading and analysis tool, as well as an online marketplace matching business people with copywriters.

It came from Kyaw’s experience after her business was sent a box of toys that were ruined by copywriting mistakes.

The service aims to provide the “localisation and naturalisation” of copy after it has been translated.

“Online translation tools are amazing, but we want to bridge that 5-10% gap after that by adding the tone and personality, the human touch,” she says.

The winning team was the last to form on Saturday morning, but Clavien says they connected immediately.

“We gelled quickly and were adding to each other’s ideas,” she says.

“We spent quite a lot of time making sure we had the right idea and we were all super excited about it.”

The team also found themselves to be last to pitch on Sunday night, meaning it was an especially difficult task keeping the audience engaged.

“We were in-between the audience and them getting to the bar, so we amped up the energy,” Clavien says.

This is one of several events that are looking to address the lack of diversity in the tech startup world.

“Awareness is really helping, there’s a lot of talk about it now,” Clavien says.

“A lot of the problem is unconscious bias, and that’s such a difficult thing to overcome. We need to keep diversity front of mind, and events like this help.”

As for CopyConnect, the future looks bright.

“There was a lot of interest after the event,” Clavien says.

“I was amazed by the amount of business cards I got. I couldn’t fit them in my pocket.

“We’ll definitely be talking soon and working out our approach.”