Follow the Hird: Business lessons from the Essendon supplements scandal 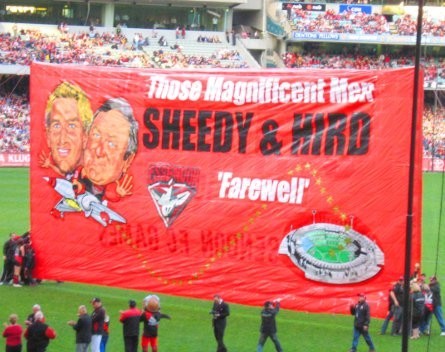 It’s hard to have had a conversation recently without it inevitably turning to the Essendon supplements saga.

I’m a Carlton supporter. So whatever punishment has been meted out to the Bombers is insufficient in my view!

However, probably the most fascinating aspect of the whole sorry story has been AFL coach James Hird and his refusal – right up until the very last moment – to back down.

No matter how overwhelming the case against him seemed to be and no matter how much pressure he was under to step down, he hung on and on.

I don’t know if I would have had the same resolve in the face of such intense and at times hysterical levels of media and public scrutiny.

When so many people are howling with outrage at your conduct, it’s hard not to think that maybe they are right.

Apart from being a great footballer, I know that Hird has enjoyed significant success in business both during and after his on-field career.

I have no doubt that his ability to remain focused and committed in the face of overwhelming odds would had to have served him well as a business person. He has the makings of a fantastic entrepreneur.

He showed an ability to push on and hang tough when everything looks lost and all your trusted advisers and confidantes are calling on you to back down.

He kept fighting and fighting with an unshakeable belief in his cause. It’s the very same belief that you need running a start-up when the world looks you straight in the eye and says “it’s time to give it all away”.

And I think that James Hird also showed another critical trait of a successful entrepreneur: Eventually, you also need to know when to back down.

Yes, put it all on the line. Burn all your bridges. Box yourself into a corner. And all those other clichés.

But when you are about to be completely wiped out, you have to know that the most important outcome of all is to live to fight another day.

I wish he got a lifetime ban.

I wish the Essendon Football Club was fined $10 million and lost draft picks for the next five years. If I’m true to myself, I wish they were formally deregistered and had their home ground at Windy Hill turned into apartments by the AFL.