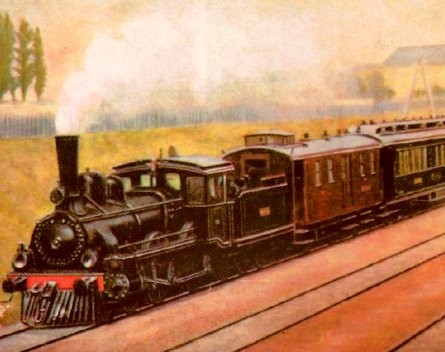 After some recent travelling, your humble correspondent is back.

Now, Old Taskmaster enjoys venturing far and wide from the sleepy hollow known as Parts Unknown. Except for one thing — the planes.

This distate of aircraft is not borne of any fear of flying or fear of heights. That said, even if such allegations were true, it’s not the type of thing yours truly would ever dare to own up to.

No, this dislike of flying comes down to class.

See, back in the good ‘ole days, the way to travel was by steamship or steam-powered locomotive. Now there was a civilised mode of transportation — especially if you sat in first class!

The great railways of the world were known for their fine decorative touches, such as their leather upholstered seats or the fine detail and craftsmanship in the woodwork of the cabins.

There was the rhythm of the tracks as the engine powered across the countryside. Over hills, down tunnels and across valleys. Through vast fields of wheat and small towns with their own sense of place and community. The locals were always happy to have a train station in town — as they most certainly wouldn’t be for an airport.

A three-course meal in the dining car, reclining and socialising with fellow travellers in the lounge or enjoying a brandy old fashioned in the drinks car were all part of the package.

It was also a pleasant environment in which to sit and think for one’s self, alone with one’s own thoughts, before the world was gripped by the fear of even spending a moment doing such a thing.

Back then, travelling to a destination was seen as an integral part of the experience of any journey — perhaps more so than the final destination itself.

Nowadays, in this instant gratification world of ours, the journey is just an inconvenient means to an end. In this age of social media and always-on cloud services, we fly more than ever before.

But there is no fine, hand-painted ornamental details lining the walls of the average plane cabin, just white rubber walls.

Some great literature — One Flew Over The Cuckoo’s Nest and the like — has been written about the inhumanity of strapping people in chairs in boring, round-cornered rubber rooms for any length of time. To the human psyche, it’s torture. It’s something you’d only do for the expediency of the quickest means to an end.

Yet, in the airline industry, the best flights are entirely spent in such an environment.

The worst flights are the ones where something interesting happens. Where the plane hits turbulence and, in a matter of seconds, drops by several hundred metres. Where the passengers start asking “is our plane supposed to creak like that?” Or they ask “is that barking noise from the engine normal?” Or they ask “Why did the oxygen masks just drop?” Or even “do you remember that one episode of air crash investigators when…”

It’s an apt metaphor for life in this crazy world of ours, where instant gratification is the order of the day and journeys are but a means to an end. Anything interesting or unpredicted becomes a disruption, rather than a joy of life.

So Old Taskmaster says this: Make sure you get a sense of joy out of the journey you’re on – or catch the next train outta there!