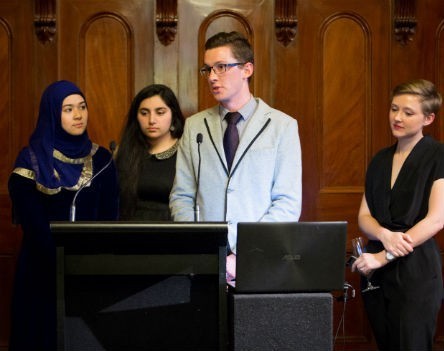 Government, entrepreneurs and large tech companies have come together to create ideas to combat radicalisation and violent extremism in a hackathon-style event.

The People Against Violent Extremism hackathon event was held in Melbourne last week. It saw three groups of four formulate an idea to turn people away from violent extremism and develop it into a prototype across three days.

“The space is too dominated by government. Because of that the design and infrastructure is typically not very innovative, contemporary or creative.

“The reason why we brought the service to Melbourne was because of the terror raids and key events in this space.”

Over 100 people from the industry and government attended the pitch and cocktail night on Friday at Melbourne Town Hall, with the winning idea receiving $10,000 to develop it into a startup.

The teams were made up of a mix of young people with a research background, community development experience and technical skills, as well as someone from an “at-risk” group.

Starting on Wednesday, the teams went through three stages in generating the products, working closely with community groups and experts.

The winner was chosen with a 50/50 split between the audience vote and a judging panel.

The winning idea was the Former Network, an online platform connecting former members of extremist groups and survivors of attacks with teachers working in “at-risk” areas.

“It’s quite a controversial idea, but it’s definitely something that’s quite pertinent,” Alim says.

“The formers are trying to humanise what it means to be formally involved in a life of that form. Nobody uniquely understands the process and impact of radicalisation like them.”

Alim says it’s important to offer this sort of support and knowledge to teachers.

“It’s an opportunity to share narratives and then that becomes the basis for the education department to engage teachers at at-risk schools to discuss appropriately,” he says.

“There’s an unfair expectation that teachers have to become the new experts in this space, and that’s an overwhelming burden.”

Impact investor Geoff Gourley was one of the three judges on the night, and says the winner was a standout.

“The winner stood out as they were connecting with people that have been active within violent extremist groups, great insights as to how those organisations work, what their drivers are and how they go about influencing others with their violent extremist views,” Gourley says.

Events across the country

The first government-funded PaVE MyHack event was held in Perth earlier this year, and the concept was brought to Melbourne with the encouragement of federal MP for La Trobe Jason Wood.

“She was speaking about how she felt the government was not doing enough to address the issue of radicalisation of our youth – so I rang her and asked her what she would do,” Wood tells StartupSmart.

“We met and spoke about MyHack, countering violent extremism and encouraging those who are at risk of being radicalisation to maintain their connections with the community.

“I decided it would be a great initiative to run in my electorate.”

Bringing startup thinking and innovation to the fight against radicalisation is a welcome step, Gourley says, with most extremist groups now using the internet to recruit vulnerable people.

“The core message was the PaVE is a community trying to raise their voice and get the message out there,” he says. “If you consider how violent extremists are able to manipulate the media to their advantage, a positive counter-voice is needed.”

“I think there is a niche opportunity here for some smart developers to create applications, platforms and technologies that counter violent extremism.”

PaVE will be holding pilot programs like this in every major Australian city by the end of the year, and Alim says they’ve received positive words from the government in running further events in Melbourne.

The feedback from the first hackathon has been “incredibly positive”, Wood says.

“This was most certainly a novel approach to the problems surrounding CVE. However, the problem is a novel one too in that much recruitment is happening in the technological space, whereas in the past it was through face-to-face networks,” he says.

“Applying methodologies that were used for Violent Extremist Networks that we used in the past would lack efficiency, so of course I would encourage more of this approach in the future.

“I look forward to seeing the winning project become a reality.”