How the Swedish Chef, Final Fantasy and football help kids get into coding 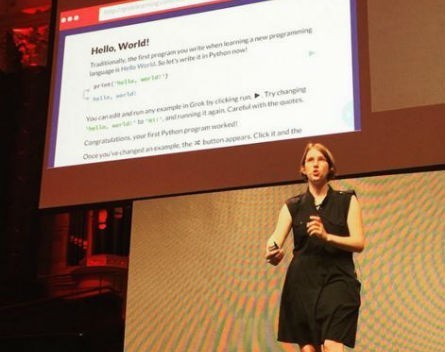 Computers and programming had been one of her passions since a young age, but it wasn’t until completing a four-year Bachelor of Arts (Languages) degree that she started considering a career in it.

After finishing a PhD in computer science this year, Ringland is now dedicating her life to making sure the next generation of kids are given the early opportunities in coding and programming that she wasn’t.

Coding concepts from a young age

Speaking to StartupSmart at the SydStart conference, she says it was difficult getting into programming at university due to a lack of exposure to the basic concepts in earlier education.

“I was encouraged into the other things I excelled at like languages and linguistics.

“I went to university and thought about studying computer science but I was worried I would fail. I did the arts degree, but I actually wanted to make an impact on the world and get a job, so I swapped into computer science.

“There was a frustration with not getting a computer to do what I wanted. That feeling is still very much with me and something that I’m working really hard to prevent millions of other students from having to experience themselves.”

Coding in schools has quickly become a hot topic of sorts recently, with both sides of the political spectrum pinpointing its importance. Every state and territory except for New South Wales has adopted the national digital technologies curriculum, which includes the teaching of coding from Year 5, and this week Labor announced $4.5 million in grants for coding projects that it will be taking to the election.

While it’s only recently emerged as a significant mainstream discussion point, it’s something that Ringland and a passionate band of educators have been working on for many years. While there’s government backing and funding now, they’ve been doing it for decades on their own.

For Ringland, the secret to preserving in this fight is pretty simple: being stubborn.

“The summer school has been running for 20 years and the challenge for nearly a decade,” she says.

“We’ve been fighting the fight. I’ve been cold calling schools for years saying ‘why don’t you teach this?’ and getting not particularly positive responses.

“Now Bill Shorten has said that the Girls Programming Network is important. It’s nice to have that shift in the political climate that’s making it a more engaging and exciting thing.”

The push to have coding in schools is bearing fruition now, but if it’s not taught in engaging way by passionate teachers, it’ll all be for nothing, Ringland says.

“We have to try to get them to have an experience with computer science that is relevant to them, and it’s about aligning it to their passions,” she says.

“That’s why we spend so much time developing questions around Pride and Prejudice, Final Fantasy and football. There has to be a real world impact.

“If we don’t get kids excited about it it’ll just be one of those required courses then they’ll move on. That’d be a really wasted opportunity.”

Ringland says most of this comes down to ensuring the teachers have the necessary training and resources to teach these new concepts effectively and engagingly.

“There are always teachers that are scared of new materials, and if they don’t feel like they’re getting the support then it is a really daunting thing for them” she says.

“Teachers are really excited about the real-world applications of coding as well. You can’t say no to a question that gets you to write an automatic translator between Swedish Chef and English. It’s learning about problem-solving and computation skills that are interesting.

“Turns out adults are just as excited about the Muppets as the kids are.”

Ringland has also been working hard to improve the diversity in programming, something she says has to be addressed at very early stages in schooling.

“Computer science is a potentially hugely lucrative market, but at the moment it’s only a small subsection and there’s a disproportionate number of students that are learning to code that are from wealthy backgrounds and are guys,” she says.

“Making it a required component and forcing every student to learn how to code will hopefully get them to have an engaging experience with it and is an important component in terms of equality.”

With coding set to be taught to young Australians in schools across the country, the work for Ringland and co is just beginning. But for someone as passionate as Ringland, this is an opportunity and challenge to be relished.

“Computing is a lot of fun and it’s really exciting,” she says.

“I want to encourage students to do something that I’m really passionate about.”