How to influence others when you’re not in the room

“What happens when I’m not there? How do I influence through others?”

These are two questions I often get when training people in behavioural techniques. They understand how they can influence the person with whom they directly engage, but what about those beyond their circle? Like your boss’ boss for example?  Or your client’s manager? Or your customer’s family? When you’re not there to do it yourself, what can you do to influence the situation?

Relying on others to make your case

Influencing someone to influence someone else revolves around two considerations: “I” and “we”.

“I” considerations are about how your potential advocate feels about what you are proposing and how they may take it forward to stakeholders. This is the “what’s in it for me?” angle that sometimes gets conflated with “what’s in it for the business?”

“We” considerations are what your advocate can use to sell-in your proposal – the “what’s in it for the business?” angle. 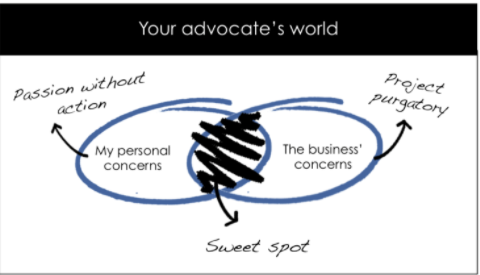 If you put too much emphasis on the “I” context personal concerns of your advocate, you risk wasting time on developing a proposal that doesn’t go anywhere.  You may have a willing advocate but they wield no power. It’s passion without action.

Too much emphasis on the “we” context concerns of the business could mean your advocate won’t feel personally engaged in fighting for the project. You will find yourself in project purgatory and your ‘advocate’ will find better things to do than answer your calls.

The sweet spot is ensuring your project appeals both to your advocate’s personal interests and those of the business.

The behavioural science behind “I” vs. “we” considerations

As much as I’d love you to take what I’m saying without delving further, I know that I will need to provide some harder edged information before you bother sharing it with anyone else. Why? Because researchers have found that “I” decisions are often made on emotion, but as soon as we know we will need to explain our decision to someone else, then we want facts.

The researchers found that those in either of the justification groups were more likely to use more information, and those in the Convincing group went through a more elaborate choice process. It seems that when we are explicitly aware that we need to convince someone to support our decision, we up the ante on due diligence.

More recently, researchers Hong and Chang (2015) looked at the impact of self-construal on whether people use feelings or reasons to make decisions.

They found people who think of themselves as unique individuals (i.e. have independent self construal, typically in Western cultures) were more likely to rely on their feelings about a decision, and those who had inter-dependent self-construal (i.e. feel bound by others, which is more typical in Eastern cultures), were more likely to rely on reasons. However, when people in either category of self-construal had to justify their decision to others or make decisions on behalf of others, reasons won out. In the study that meant people preferred ads for apartments and laptops that highlighted functional benefits (e.g. apartment size, laptop battery life) to emotional attributes (e.g. apartment view, laptop visual aesthetic).

Having to explain options to others also changes which choices are preferred. In a study by Stanford researcher Itamar Simonson (1989), people were more influenced by how choices were presented when they knew they would have to justify their decisions to others. In this case, people were more likely to go for a compromise option (i.e. the middle rather than extreme choices a.k.a. the Compromise Effect) and more likely to be pulled towards an option that was presented alongside a decoy whose role was to steal attention from a third alternative (a.k.a. the Attraction Effect), when they had other people to convince.

What do these studies tell us? Two things.

As you may recall from earlier blogs, the core of behavioural influence is getting people from point A, what they’re currently doing, to point B, what you would like them to do. In order to do so, you need to anticipate and address three behavioural barriers – apathy, paralysis and anxiety.

Thinking about this from your advocate’s perspective, we can break our behavioural challenge into two tasks.

First we need to analyse and address the behavioural barriers in the personal “I” considerations context. That may look something like this… 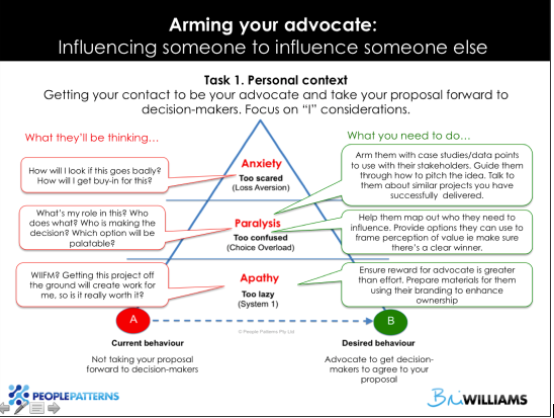 And then we can analyse and address the behavioural barriers in the business “we” considerations context. That may look something like this… 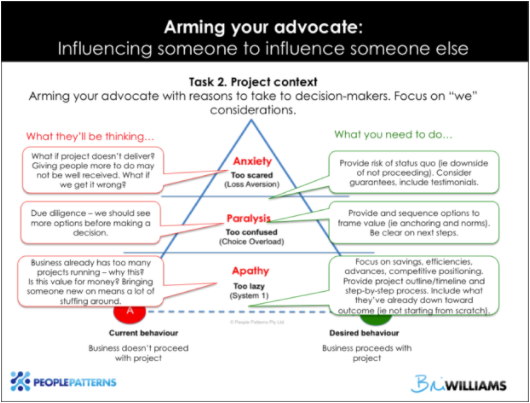 By completing the Williams Behaviour Change framework for both your advocate’s personal and business contexts, you will be able to flush out any potential objections and ensure they are ready and raring to go into bat for you.

Bri Williams deletes all buying hesitation and maximises every dollar of your marketing spend by applying behavioural economics to the patterns of buying behaviour. More at www.briwilliams.com.au.