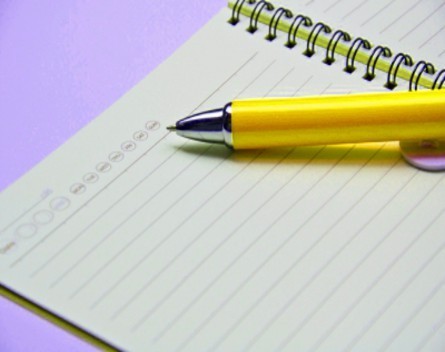 You can divide the people on this planet into two broad categories: Those who keep a long to-do list and notes, and those who don’t. If you’re in the latter camp, I’m sorry to say, you’re not working as efficiently as you should!

You see, inspiration can strike at any time.

It might happen while you walk the dog. You might notice something curious on your way to work. There might be an interesting item or idea on a TV show segment you want to follow up on. You might come up with (or hear) a brilliant idea while having lunch with a colleague – perhaps even at a business meeting (hey, stranger things have happened!).

It might be during a tall tale while lounging back in a leather recliner in front of an open fireplace while slowly savouring a brandy old-fashioned at the hotel in Parts Unknown.

Unfortunately, inspiration seems to strike at the most inopportune times.

It might be while you’re bushwalking and have no means of communicating your fantastic idea. You might be snowed under with other tasks you need to do. You might be intoxicated after savouring one too many glasses of brandy.

If you’re not a note taker, these moments of inspiration are gone! Forever!

You’ll sit there and tell your colleague “I’ll keep that in mind”. And then that thought will be smooshed under the weight of far more urgent things that needed to be done by 22-minutes ago!

Your ideas are precious – even some of the bad ones that need refining. They can be valuable. And like a particularly cute baby endangered animal – the kind charity spruikers hold up pictures for in the street – once they’re gone they’re gone for good!

If you’re not a note-keeper, I’m sure you can think of situations where that’s happened to you.

Thankfully, you can do something about it!

Old Taskmaster says this: It’s time to switch sides in this discussion! Join the note keepers! Abandon your old, heretical no note-keeping and no to-do list ways and maintain a single, organised list of notes at all times!

This should include a long to-do list, as well as scrawled notes and – ideally – a calendar.

You might try doing this with a note-taking app on your smartphone or tablet. Your dear old Uncle Taskmaster’s preference, however, is for a good old-fashioned pocket-sized paper spiral notebook with a pen.

Whatever system you opt for, make sure it’s with you (or within fast grabbing distance) at all times! More importantly, make sure you use it and get in the habit of looking back over it at least a couple of times a day.

So what are you waiting for? Don’t just think about it and then forget it! Make a note of it!

Then get it done – today!