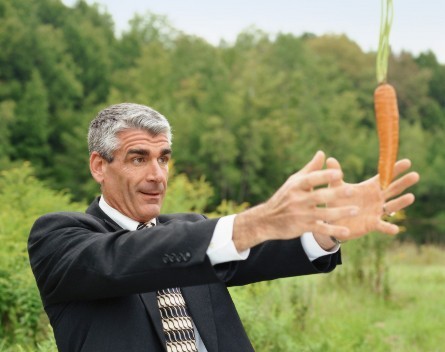 So many people think that money is what motivates people.

Surprisingly, it’s far from the truth.

The old thought system to motivation is reward and punish. The stick and the carrot.

Alfie Kohn writing in the Harvard Business Review points out that offering rewards to change set behaviours like eating less or quitting smoking does not work. Numerous psychological studies back up his thesis.

Dan Pink in his outstanding book Drive showed that the carrot and stick works for short-term motivation but not for long-term engagement or long-term results.

“Incentives … do not alter the attitudes that underlie our behaviours,” Kohn says. “They do not create an enduring commitment to any value or action. Rather, incentives merely – and temporarily – change what we do.”

“It is plausible to assume that if someone’s take-home pay was cut in half, his or her morale would suffer enough to undermine performance … but it doesn’t necessarily follow that doubling that person’s pay would result in better work,” Kohn postulates.

Simon Sinek in his book Start with Why shows that the reason behind what we do really motivates us to put in more effort long term. If someone identifies with the company value of what you are doing and the why behind it, they are more likely to adhere long term to fulfilling the role with passion and enthusiasm.

As Harvard Business School professor Teresa Amabile has found, a sense of progress is crucial to actually staying engaged. In an experiment detailed in her book The Progress Principle she asked 238 employees across seven companies to keep daily diaries of their workdays. She found a pattern.

A close analysis of nearly 12,000 diary entries, together with the writers’ daily ratings of their motivation and emotions, shows that making progress in one’s work – even incremental progress – is more frequently associated with positive emotions and high motivation than any other workday event.

During Pink’s TED talk in 2009, he says there is a mismatch between what science knows and what business does. Rewards, he says, make us single-focused, which leads to incorrect solutions. The solution is autonomy rather than top down, which he says is great for automated mechanical processes but not for the more creative processes required in this century.

Tony Hsieh, the chief executive Zappos, in his seminal book Delivering Happiness is clear that creating the why and a culture that backs it up, is the only way to get long-term motivation. Given he built the company from a revenue of $1.8m in 2001 to $1 billion in 2009, maybe we should be heeding the message.

Brett Jones is CEO of The Entrepreneur Tribe by Cre8 and frequent author on entrepreneurial matters. @cre8australia