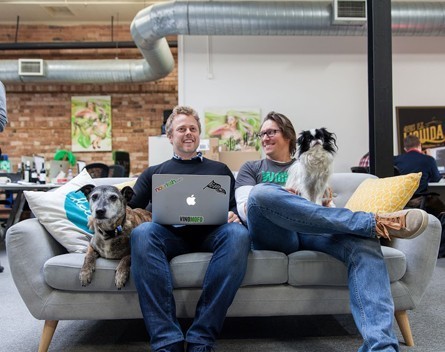 Going by the name of JD, the 11-year-old staffy mix has quickly become used to office life, and is already beloved by the staff.

It’s part of Vinomofo’s new partnership with animal rescue charity PetRescue, making it the first company to be fostering a dog in its office as part of the Workplace Foster Care Program.

The program involves companies taking in a dog or a cat during office hours and one employee looking after it at night.

It’s hoped that either through the startup or its network, a permanent home will be found.

“It was meant to be”

Vinomofo co-founder Justin Dry, who happens to share a nickname with the rescued dog, says JD’s presence has been welcomed in the office.

“He’s more popular than me now.”

“We’re really, really proud to be involved with it. I’m a massive animal fan and the rest of the team just loves them too, so there was no real hesitation once we checked with everyone.”

JD comes into the Vinomofo every day, and is cared for by campaign manager Charlotte Cels at night. The team is currently working on a social media campaign, and reaching out to its network to find the dog a permanent home.

Despite being a bit shy early on, JD now sounds like the king of the Vinomofo office.

“He hasn’t had the greatest life before he went into rescue, so he came to us quite a timid dog,” Dry says.

“It didn’t take long though after he was showered with love from the team.”

“Now he’s a completely different animal, it’s amazing to see. He’s so happy and he’s constantly being taken on walks.”

How a dog can improve an office

JD isn’t the only one benefiting from the arrangement though, with Dry saying it’s also helping with productivity and mood in the office.

“There’s definitely been a lift in the team,” he says.

“Dogs are just so happy and loving, there’s no BS around their excitement and joy for life.

“JD calms everyone down and gets people out walking in the fresh air. There’s a great vibe in the office with a dog around, everyone is lifted, happy and calm.”

Dry encourages other startups and businesses to get on board with the workplace foster animal program, and see the benefits for the animal and their company.

According to a study by PetNet, having a dog around the office improves employee morale and work productivity, lowers stress, decreases employee absenteeism and boosts employees willingness to work overtime.