“What you can’t measure you can’t manage”: Empathy the key to more diversity in tech 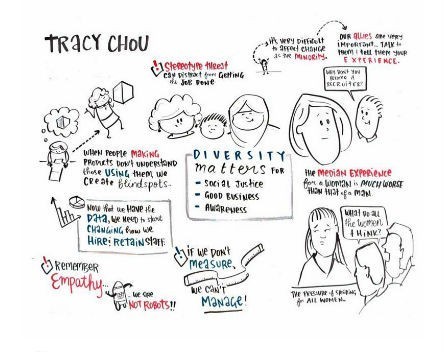 Being empathetic and creating allies is key to improving gender diversity in tech, says senior Pinterest engineer Tracy Chou, whose campaign led to some of the world’s biggest tech companies publishing diversity statistics.

Chou’s push for gender diversity disclosure led to a number of tech giants including Microsoft, Google, Apple and Facebook publishing statistics on gender diversity in their workplaces. She shared her thoughts on improving diversity in the tech sector in an interview with Claire Porter at the Above All Human Conference in Melbourne.

A key reason why tech companies should aim for more diverse workforces, according to Chou, is that product decisions are generally better when the people designing those products reflect the demographics of its users.

“Diversity is important for many, many reasons, one of them is we’re trying to build products for everyone,” Chou says.

“When I first saw the glass staircases in an Apple Store, my very first thought was that there must have been few women working there, because I didn’t want to walk up those stairs in a skirt.

“You get more innovative, creative teams that challenged — you don’t take assumptions for granted. Being face-to-face with someone who doesn’t look like you can get you to challenge your assumptions.”

Other reasons for the tech sector to aim for more diversity include social justice, in terms of tackling gender and racial inequality, as well as filling skills shortages.

“The tech sector is doing well at the moment, and careers in tech are a good pathway up socially,” Chou says.

“From an economic perspective, there’s a huge demand for computing jobs — US labour stats show we’re heading to a 1 million job shortfall, so it’s silly that there’s a whole class of people that aren’t even participating.”

Chou says that some reasons will resonate more with some tech industry leaders than others, and so those looking to improve diversity need to tailor their message accordingly.

“Some might not get it for social justice reasons, but they might be looking for candidates,” she says.

“For some it’s more awareness. Some people might not be racist or sexists but just not see the problem.

“Some male friends don’t see any problem because a lot of it happens in uncomfortable [one-on-one] situations. So if you’re one of the good guys in tech you’ll never be in these situations and you’ll never participate.”

Chou recounted a recent example at a Grace Hopper Conference at a session on male allies, led by four white male execs. The session prompted a lot of backlash about men telling women what they need to do, so the next day a session was held where microphone was passed around the audience and women in the audience shared their frustrations with the executives.

Afterwards, the panellists said they weren’t surprised too hear the stories, but they were taken back by the ubiquity of the experiences. “When these men heard almost every single woman had one of these stories, it really hit home for them,” Chou says.

“The interesting is we can test strategies against how much they move the needle… What you can’t measure you can’t manage,” she says.

Chou identifies a number of a number of reasons why women and people of colour leave the tech sector. These include people feeling that they don’t fit in, the weight of representing an entire minority and the weight of expectations.

Another factor is the death of 5000 paper cuts.

“There are jokes. None are that severe but in aggregate they all add up,” Chou says.

“There’s also stereotype rep, which is when you belong to a minority that has a stigmatisation problem around performance. For example, if you’re a woman in STEM (science, technology, engineering and maths) or black kids in schools, you expend a lot of time thinking about that stereotype it becomes a self-fulfilling prophecy.

“So if you make girls fill out a gender bubble before an SAT test, you’re reminding them of the gender stereotype which makes them perform worse, where otherwise they would be fine.

Telling personal stories instead of generalising, can be a powerful way of communicating the issue and building awareness.

Chou gives the example of a time she was told by someone they are surprised she interested in tech rather than having a family. Another was that she was told because she’s good at talking to engineers she should become a recruiter, rather than an engineer herself.

‘”I think [male allyship] is huge. It’s hard to affect change if you’re a minority… It’s really important that we figure out good ways to work together to solve the problem.”