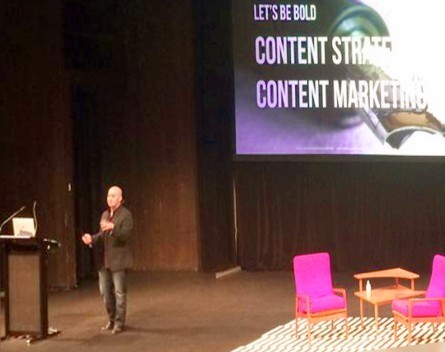 Developers, designers, entrepreneurs and corporate innovators gathered at the Web Directions South Conference in Sydney last week to hear about some of the big picture issues facing the technology industry.

Here are seven takeaways from the conference.

1. The network is the new electricity

The world is entering a new era, where thanks to the Internet of Things, everything is on “the network”, BERG co-founder Matt Webb told the conference. It’s a technological development that has the potential to be just as impactful as electricity was in the 20th century.

He says the network is not about Wi-Fi, or Bluetooth, the things that make up the Internet of Things, but it’s about relationships between people.

2. Communication is key for user research

Nokia product marketing team head dreamer Younghee Jung passed on some wisdom she learned during her time conducting user research in India for Nokia. She says given it can be difficult to judge whether or not testers are telling the truth about the products they’re being exposed to, it’s important for researchers to follow their gut instinct, and put their testers in the best possible environment for honesty.

For Jung, this involved ensuring her testers had tools to communicate that they were comfortable with, including chalk and blackboard and coins to help with value attribution. When confronted with extremely polite testers she manufactured a situation in which it would be socially acceptable for them to be critical of the product – a debate.

3. Be open to discovery

Building on the idea that it’s difficult to know exactly how accurate user research can be, Jung says it’s important to expect the unexpected. That ensures researchers become aware of, and open to hearing about, issues they might not have even known existed.

4. It is important to understand the concept of time and how that relates to the interaction of users with products

When working on products, designers should take into account both the measureable and unquantifiable aspects of time and how that influences users, Twitter senior UX designer Erin Moore says.

Moore came up with a handy formula to help designers and developers negotiate this topic: In order for people to feel (blank) > We must build an experience that (blank)> some ways we could achieve that are (blank) > and in order to do that we need to (blank).

5. There’s an opportunity for startups targeting the aspects of humanity that are “in flux”

Intel anthropologist Genevieve Bell says there are a number of stable and “in flux” attributes that make up what it means to be human. While many startups and technology have appealed to those stable attributes, those in flux attributes have been neglected to some extent, and that presents an opportunity for new startups.

Those in flux attributes include the need manage our reputations, a desire to be surprised and on occasion bored, a desire to be different, an ability to be forgotten and a need to feel time.

6. Trust amongst team members is essential to design great products

Google UX designer Jonny Mack’s had an interesting insight into team dynamics, when he was working on two projects, one with a large team that struggled with team work, and another smaller team of three where each individual went out of their way to make it work.

He says while designers tend to want to jump right in and get to work, it’s necessary to first think hard about how to foster a great team. One way to go about this is by tackling four separate stages. The first stage is forming, a period where the team get to know one another and the project and make decisions about high level goals. The second stage is storming, which occurs once the team has built up enough initial trust so as everybody feels comfortable speaking their mind. This ensures everybody feels their views of been heard, and helps them feel like stakeholders in the process.

The third stage is norming, where people have aired their grievances but have now committed to the direction the group has decided to take the project. The final stage is performing, where all members of the team are collaborating well and operating with less oversight from managers.

7. The concept of open internet is under threat

There’s a growing movement among entrepreneurs in Silicon Valley to avoiding using the phrase the internet, according to designer and futurist Tobias Revell. He says it’s important to remember and protect the idea of the internet as a great democratic, egalitarian platform not a “series of increasingly expensive walled gardens where you’re constantly spied on”.