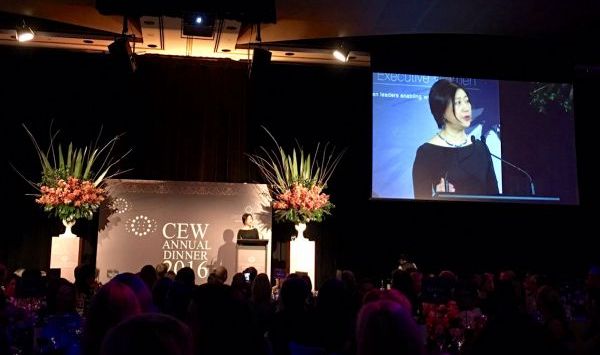 You can lean in or out or sideways or whatever way makes you happy, according to Chua Sock Koong, who heads up the Optus parent company Singtel.

Indeed, she herself didn’t always ‘lean in’.

“I had to be ‘encouraged’ to go for the CEO position,” she told the 900-strong crowd at the annual Chief Executive Women (CEW) dinner on Wednesday night.

“I too suffered from a kind of reticence.”

She urged those in the crowd – some of the country’s most powerful businesspeople – to mentor young women, and to be the kind of mentor they wish they had.

“Leaders create more leaders. Not just followers,” she said. Chua said a good leader is like a good sporting coach, someone who can tell their players they can be better than they already are.

Chua added that too often she’s asked how she’s managed to “make it so far” as a woman, a question she said would never be asked of a man. She said she’s now used to this line of questioning, just as she got used to walking into a meeting and seeing those in the room expecting she was the secretary and was there to serve tea.

“You learn to laugh these things off,” she said.

“The best way to overcome gender stereotypes is to deliver.”

As for her advice to the ambitious women in the room, she urged them to go for jobs that offer great experience rather than those that will pay the first million.

“Don’t think about making that first million fast,” she directed at the CEW scholarship winners who were present in the room.

“Instead, look for career options that will give you the opportunity to learn and grow.”

Chua said women are still far too underrepresented in the business world, making up less than 5% of chief executives of the world’s largest organisations.

“The larger the company, the less likely the head will be a woman,” she said.

Therefore, it’s absolutely essential that women support each other: “Behind every successful woman is a tribe of other women who have her back,” Chua said.

Meanwhile, CEW President Diane Smith Gander urged the audience to promote boardroom gender equity, and added we’ll know we have gender equality when girls get the same pocket money as boys, and women get the same number of leadership positions as men.