Eight great startup quotes to help you get through your day 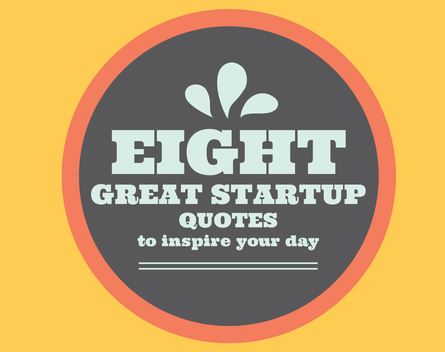 Starting your own company can be the hardest thing you ever do, but a few words of wisdom never go astray. In fact, there are whole websites dedicated to inspirational quotes for people who want to set up their own business.

Here at StartupSmart we decided to trawl the web for eight of the best.

1. “Our industry does not respect tradition – it only respects innovation.” – Satya Nadella, Microsoft

Nadella is the chief executive of Microsoft and has been with the company for 22 years. This particular quote is exemplified in his push for Microsoft to embrace cloud computing.

On the company’s website, Nadella says Microsoft must continue to transform and bring innovative products to customers more quickly.

2. “The critical ingredient is getting off your butt and doing something. It’s as simple as that. A lot of people have ideas, but there are a few who decide to do something about them now. Not tomorrow. Not next week. But today. The true entrepreneur is a doer, not a dreamer.” – Nolan Bushnell, American engineer and entrepreneur

Bushnell is an American entrepreneur renowned being the cofounder of Atari Inc, a company that helped pioneer arcade and home video games. Interestingly, Steve Jobs and Al Alcorn used to work for him in the 1970s.

3. “Be undeniably good. No marketing effort or social media buzzword can be a substitute for that.” – Anthony Volodkin, founder of Hype Machine

Volodkin founded Hype Machine – an online music database – while he was still a computer science student. The website aggregates the most recently posted songs from a range of music blogs, and markets itself as a way to find “new music worth listening to”.

Speaking of blogs, Volodkin has a personal Tumblr where he often posts about startups.

4. “Chase the vision, not the money, the money will end up following you.” – Tony Hsieh, chief executive of Zappos.com

Despite being a workaholic himself, Tony Hsieh is renowned for promoting a fun workplace culture that involves everything from a man dressing up in a hot-dog suit and doing backflips to “Tutu Tuesdays” (yes, yes you did just read that correctly).

5. “Remembering that you are going to die is the best way I know to avoid the trap of thinking you have something to lose. You are already naked. There is no reason not to follow your heart.” – Steve Jobs, co-founder of Apple

Many entrepreneurs talk about the importance of having the courage to take risks, and this quote by Steve Jobs sums it up rather nicely.

6. “A culture that supports women doesn’t come about spontaneously; it only happens when the leaders of companies create policies and initiatives to stimulate such a culture. In my experience, mentoring women into leadership is fundamental.” – Naomi Milgrom, chief executive of the Sussan Group

Let’s face it: the majority of startup quotes floating around the internet are by men. Milgrom is a refreshing voice and renowned champion for women – particularly when it comes to flexible work practices.

7. “There is a whole myth about super people. That super people can do everything and they do it on their own.” – Therese Rein, founder of Ingeus

While entrepreneurship is often stereotyped as a lonely pursuit, Rein’s quote is important because it highlights that even the most talented people cannot do everything by themselves. Often it takes a skilled co-founder or co-working space to really make a startup the best it can be.

8. “Don’t worry about failure; you only have to be right once.” – Drew Houston, founder of Dropbox

Houston is the founder and chief executive of online storage service Dropbox. If anyone knows about only needing to be right once, it’s Houston – before Dropbox he worked on a number of startups and is now worth $1.2 billion.