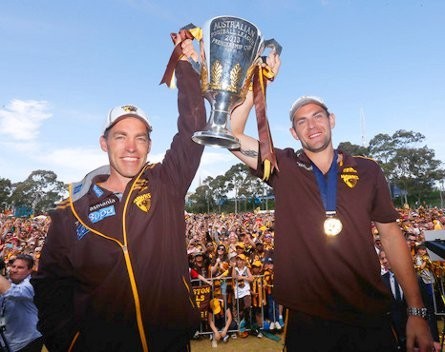 Well, in a great surprise to exactly nobody, Old Taskmaster toasted a brandy Old Fashioned in celebration of the AFL grand final result on Saturday.

And, even if you’re not a footy fan, there’s an important lesson from the grand final result that can be applied to your business.

Very early on in the match, it became apparent the deciding factor would be how well the teams handled the pressure of playing on such a big stage.

On the one hand, there was Fremantle. A club that, during its 19 years in the AFL, had never contested a grand final. Only two of their players had any experience on that one day in September.

Their opponents, Hawthorn, represented the greatest club in the modern era of the game. This was an organisation that, coming into the match, had already racked up 10 premierships in the post-war era, including at least one flag in five consecutive decades. Victory has become a habit for the family club.

(Before anyone sends any nasty emails about this account of events, just keep this in mind: when it comes to politics, your humble correspondent is completely unbiased. Old Taskmaster will always despise all politicians equally. Likewise, this author is tolerant of different religious confessions. Football, however, is a very different matter.)

It was the third grand final for a number of Hawks players, having won one in 2008 and lost one against the Swans last year. They had also come within one preliminary final win of contesting the 2011 grand final.

This year, the Hawks were in fine form, having lost just three matches all season and broken the Kennett curse against their fiercest rivals, Geelong.

Unsurprisingly, the AFL and much of the media were cheering Fremantle on to win. Even the purple ribbons were more prominent on the cup.

However, during the first half, in front 100,000 screaming fans and over 3 million television viewers, Fremantle clearly lost their nerve. Fremantle’s Nathan Fyfe and Matthew Pavlich missed easy goals they no doubt would have nailed in any other match.

At the opposite end of the ground, the Hawks’ Jack Gunston slotted the goals with ease. Freo managed just one goal for the half, where Hawthorn managed five.

At half-time, Fremantle coach Ross Lyon fired up his troops, and they responded. But even then, the Hawks stayed cool, calm and one step ahead. At no time did they let the Dockers ahead.

After the final, heart-stopping quarter, the heroic and gallant Hawks won 11.11.77 to 8.14.62. In one of the greatest events on the sporting calendar, it was the Hawks’ ability to perform under pressure, and their experience in high-pressure matches, that proved all the difference.

The lesson for business is simple. It’s not necessarily pressure that produces results. Instead, it’s the ability to build teams that are resilient in stressful situations that makes the difference.

Like the mighty Hawks, some of that comes from experience and teamwork. However, in an office or workplace environment, project management and reasonable deadlines are ways you can control the pressure, ensuring a tempo that allows your team to perform at their most effective.

Over to you. How do you keep the tempo of your workforce under control? Are there ways you can think of that could make your workplace less stressful?