How ‘digital natives’ are killing the ‘sage on the stage’ 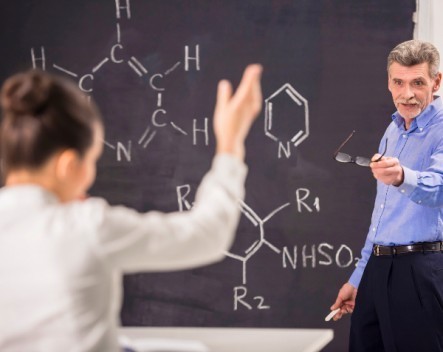 While this was generally true back when textbooks where a rarity, and may have been partly true since the invention of the public library, it is most likely untrue for at least many students in this era of the “active learner” (AKA “digital natives”).

After all, with a smartphone in every student’s pocket and Google only a tap away, how can the humble sage expect to compete as the font of all online knowledge?

The world is a stage

The very birth of the lecture comes from medieval times, when books were difficult to make and experts were few and far between. Back in those days, the best way to record knowledge was for a monk to stand up the front of the room and recite the passages from a manuscript or book, while the novices below him hurriedly wrote down exactly what was said.

As universities emerged, this tradition continued, with the expert at the pulpit and the juniors in the audience. Hence was born the “sage on the stage”: the expert providing their knowledge to others so that they could learn from this font of all wisdom.

Since then the role has evolved, but the basic principle has remained the same. Throughout the decades leading towards the end of the 20th century, models were extended with tutorials, laboratories and workshops. But the academic remained the expert, providing their knowledge to (sometimes eager) students.

As part of this role, it’s the academic’s job to entertain, and we have all known academics who take this part of the role very seriously, getting dressed up for class, using props or even planning out a performance with costumes and mask in advance.

These academics are embracing the “stage” part of the job, in line with the recent article noted above on explicit teaching, but the core idea still remains: they are the font of knowledge, the single basin from which students should ‘drink’, building their knowledge of the subject matter through contact with an expert.

The 21st century: when it all changes

But something happened around the turn of the millennium. With the rise of the internet and the beginnings of search engines such as Google, no longer was the expert (or the public library) the only place to acquire knowledge.

All of sudden, if you were out to dinner and somebody asked you who directed The Lord of the Rings movies, it was a quick tap and a search for you to yell out “Peter Jackson”. Pub quizzes changed forever, and all of a sudden we found ourselves with a wealth of knowledge at our fingertips. Even worse, the answer you read in (or copied faithfully from) a book several years ago may no longer be the answer now.

This change flowed to academia. But as with much in academia, it took some time to take root. While students were already starting to bring their mobile phones into the classroom (to the chagrin of some academics), academia was struggling to move away from tradition.

By and large, lectures still existed. But they were supplemented by blended learning, flipped classrooms and Massive Open Online Courses (MOOCs). All of these technologies looked to keep the “sage on the stage” mentality, but supplement it with other resources, so that the internet and its resources could serve as a supplement to the expert on the pulpit.

But we’ve started to notice something over the past couple of years. All of sudden, students don’t think lectures are as important as they once were. We already know students sometimes don’t attend their timetabled lectures, but what has changed is the reason.

Rather than sleeping in or being too busy with homework, the common reason we now hear from our undergraduates is that there is no need to come to the lecture. Why come and listen when they can access YouTube videos on the subject, or read a host of web pages where experts lay it out step-by-step?

And yes, they can even do this from their iPad after they roll over in bed after a big night out!

No longer are academics the sole expert at the pulpit, the sole basin from which students can drink. We are now just one of many possible fonts from which a student can sate their thirst for knowledge.

The lecture as a performance piece

So, what is the humble sage to do in this new paradigm? How do we deal with the fact that our stage is gone, replaced by an garden of different fonts of knowledge?

One option could be to embrace the performance art aspect of the role even more.

Talk to any creative type and they will tell you that the real impact of their work is not just the performance, but how it makes the audience change. How it makes them think deeply about the subject.

A creator has really done their job when a movie such as The Imitation Game is not only entertaining, but encourages the viewer to read more about Alan Turing or the Enigma machine. Or perhaps even to contemplate the attitudes to homosexuality in the early 20th century and now. The performance serves as a launching point for investigation of the area, and “moving the furniture” in the mind.

Perhaps the academic needs to aim for the same? Make the lecture an entertaining performance piece on the area that causes the students to look into it more deeply. Recognise that students can get information from many places and embrace this by aiming for the lecture to be a highlight reel and a teaser rather than an expert at the pulpit.

Yes, this means every lecture should be a special occasion, but is that really a bad thing? If it gets our students thinking, then hasn’t it done its job?

If academics begin to do this, then maybe we can reclaim the role of “sage on a stage” in a different way. We can move from our old fashioned pulpit to a digital stage, providing a highlight reel of our discipline and becoming a truly digital sage for the active learner.

If this happens, then maybe the measure of success will be a measure of how many students are using a mobile phone in the classroom rather than how many are putting it away!