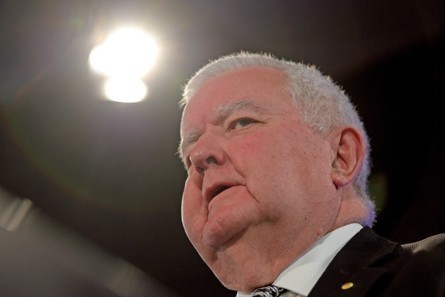 It’s a position he’s held for almost five years, during some of Australia’s most turbulent political times. He’s served under four prime ministers and six science ministers (if not always by title), for both Labor and the Coalition.

“Having six of them [science ministers] over a period of five years is probably not the easiest way to get a consistent approach so what do you do in circumstances like this,” Chubb told The Conversation.

There were some challenging times, such as when he encountered hostility towards climate science.

“The most turbulent I suppose as far as I was concerned was some of the hostility towards climate science which I think was irrational then and I think it’s even more irrational now.”

Overall he believes Australia’s position has improved over the years but he says we need to be more than just good followers and early adopters of new ideas. We need to develop new ideas of our own, for others to follow.

So what are his achievements over that time and what’s his advice for his successor, Alan Finkel?

The real issue for me was whether we were doing as well as we possibly could. The short answer to that is that I didn’t think that we were.

The reason for that was, as you would expect, [there were] multiple reasons, and I thought that we needed to be willing to address some of those, and in order to do that then they had to be exposed. I have said many times I think that overall we’d become very complacent, we’d sort of lived off resource-boom peaks and forgot about the troughs and always presumed there would be another peak around the corner.

When I looked at what the rest of the world was doing, the rest of the world – whether they were rich in natural resources or poor in natural resources – [they] were all trying to make their science, technology, engineering and maths a high enough priority, given some of the capability and the skill sets they needed to shift their economies and to survive in what would be an increasingly competitive but very much STEM-based world. We weren’t doing that on the scale that we needed with the cohesiveness that we needed.

So we do some things very well – there can be no question about that – but we didn’t have a whole-of-government approach. We didn’t have the capacity, really, for any obvious influence on Department X if Department Y wanted to expand in a particular area. So, you know, how do we bring that about?

So I thought that the lack of a national strategy, the lack of a whole-of-government approach, the fact that we could see things, disciplines, important disciplines, the decline stemming from a relative lack of popularity and so on was not something that we should just let happen and wake up after the event and say why did we let that happen, which is commonly the case.

What was the first thing you set about doing?

Well I wanted to see how good we are. I’ve grown up with the mantra that we punch above our weight.

When you think about that you think that that is actually a fairly stupid statement leading to complacency because it doesn’t actually get down and say, well, what weight class are we in and unless you define the weight class then what’s the point of saying we punch above our weight.

So I wanted to know what that meant, but importantly, I think, no matter what number we put on such a statement the real question is who’s ahead of us and who’s behind us and what do we do to improve?

What position did you find Australia was in?

Well, not as good as we thought. If you look at some of the western European democracies, the US, Canada and so on and then we are behind most of them in terms of performance metrics and of course we’re better than some.

But of course, you know, we’re better than half the OECD or two thirds of the OECD but there are some countries that are countries like Australia ought to be better than. I quibble with the notion that we are world class in nearly everything we do.

The UN has got 190 or so nations represented in it and the OECD has estimated that something like 140-plus of them are eligible for foreign aid so if we’re not in the top 45 or so then we’d be really in a sad state. But wherever we are in that top 45 then surely who’s ahead of us and who’s in our immediate vicinity is of critical importance to estimating how well we’re actually travelling.

After almost five years in the job where do you feel Australian is now with regards to its science and its STEM?

Well we’ve taken some of the steps that other countries took some time ago, with an emphasis on innovation and getting our rules and regulations and our policies right. Federal, state and territory ministers have agreed to a national STEM strategy for schools and I think all of those are positive steps.

What do you see as the immediate challenges for Australia for the future?

Well part of the challenge is to make sure that everyone understands we can’t do everything, and what we do chose to do we’ve got to do very well.

There are certain phrases that stick in your mind, some of which you find extraordinary, and some of them you find abhorrent. Somewhere between those two there are things like being a fast follower or a fast adopter, I mean, what that means is that our aspirations can never be better than second. How sensible is that?

Of course it would be unlikely that we will produce the next greatest smartphone that will take all the market share of some of the big players in it at the moment and so, yes, we will embrace the technology that they’ve produced but it ought not to be a sort of simple statement of fact that we are fast followers or fast adopters.

We might do that for some things, but there are some things where we actually ought to be waiting for people to follow us and identifying where we have that comparative advantage, where we have a particular national need that only we can meet but also where we have that comparative advantage seems to me to be something that we need to identify, invest in it and take new goods and services to market because we know more about something than we did at the start and we know how to turn it into a good or a service that people want.

There are some frustrations you hear from researchers working in areas not considered to be a priority – what do you say to them?

I say to them, well not every dollar will be spent on priority areas. But equally, we have to be realistic about this, there are some things that Australia has to do for Australia’s benefit that are simply more important than other important things right now, and when we have a limited and rationed resource the notion that we can simply split that quite thinly to keep as many people as possible happy is not a sensible way to plan for the future.

So the two answers are, not every dollar would be spent in the priority areas so people with really good research that still needs support and is of top quality but in an area that’s not picked up by some of the priority areas at the moment, there’s still opportunities for them to be supported.

But the context for that is we can’t do everything.

Well, we had a lack of a person with the title of science minister but I don’t think his behaviour changed when his title changed, so, I always saw him as the minister with responsibility for science even though he was called something different.

I know it’s symbolically particularly important and of course I was quite happy when they did change the title to include science in it, but in terms of my role and my function then I don’t think I noticed any difference in Ian Macfarlane’s behaviour suddenly because they added a couple of words to his title

But having six of them over a period of five years is probably not the easiest way to get a consistent approach so what do you do in circumstances like this. You don’t cut your cloth according to the minster whose suit you’re trying to make, you know what you think should be done and you know how we need to go about doing it and so my message didn’t change through those six.

You were in the position during some turbulent times politically – how challenging was that for you?

The most turbulent I suppose as far as I was concerned was some of the hostility towards climate science which I think was irrational then and I think it’s even more irrational now. That’s where I noticed the biggest thing that sort of pushed back and indeed some of the way in which people who couldn’t dispute the evidence in any sensible way so they’d just attack the messengers.

With respect to the politics it didn’t have much influence on me. I mean, I got along all right with all of the various ministers from both Labor and conservatives and got on well with the four prime ministers when I needed to meet them and had good interactions with all four, so I don’t have any complaints about any of that.

What’s your advice to Alan Finkel when he takes over as the new Chief Scientist?

Any professional advice I’d give him, I’d give him in private, but my overall advice would be to enjoy it.

There’s a whole bunch of people who have made their contribution to it so it’s been an enjoyable, close to five years for me.

I’m fortunate enough to have learned something new on a regular basis, not least dealing with people who are completely different. For example, have a look at the six ministers, have a look at the differences between the four prime ministers, and when you can get on with them and get things done, you know, that can be very rewarding so I’ve enjoyed it and I’ve enjoyed my interactions with all of them.

Michael Lund is the Science and Technology Editor at The Conversation.