Techfugees just the start of “hacking for social change” 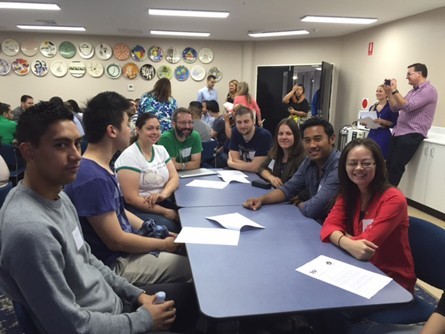 The Sydney tech and startup community has come together to try to make settling in Australia easier, in an “unprecedented” show of support for refugees.

The Techfugees hackathon, hosted by Liverpool Council in the city’s library, saw about 150 founders, entrepreneurs, developers and investors team up with NGOs and refugees to develop numerous ideas and startups to help with this issue.

The event was organised by Annie-Marie Elias, muru-D’s Annie Parker and LanzaTech’s Nicole Williamson and sponsored by Settlement Services International and STARTTS.

It was a “magical” and very powerful weekend, Elias tells StartupSmart.

“The generosity of these people is just crazy and unprecedented – it’s second to none,” she says.

“They’re so capable and achieving massive goals in their own world, but there’s so much need out there. All you have to do is tap them on the shoulder and they’re there.

“The magic was bringing together the tech and startup community with the people affected by this issue.

“It planted a seed in the community, local council and NGOs that they can help refugees in a way that’s better than waiting around for the government to sort this out.”

The weekend began with refugees describing the various problems they faced when trying to settle in Australia and groups then forming to tackle these issues with a tech solution. The refugees mentored and collaborated with each group.

“They were so passionate and so happy that people cared,” Elias says.

“Whatever narrative they hear about refugees, now they have seen a different one.”

The winning idea from the hackathon was Goalify, an online platform to help refugees and case workers set goals for what they want to achieve, and then connect them with the means and information to do so, as well as sending reminders.

The team behind the idea will now receive $10,000 to incubate the idea to launch and mentoring from Pollenizer and Expert360.

Other ideas included a means to connect people with refugees in the community through food, a document and conversations translation service, a social network for learning English and an app to curate local business and services for refugees – an idea that has already been backed by Liverpool Mayor Ned Mannoun and will be launched in the area soon.

Buoyed by the success of Techfugees, Elias wants to create a national movement of using tech and startup skills for good.

“My mission in life is to hack for social change,” she says.

“We have to generate a series of hacks for social change.”

The trio are already looking to hold a similar Techfugees event in Melbourne and another in Sydney focusing on refugee women and girls, and they’re also looking to tackle other crucial issues.

“Domestic violence is something I think that we can solve differently,” Elias says.

“These tipping point problems that the government is really not cutting it with.”

The group wants the government to get on board with these initiatives too, on the back of its inaugural Policy Hack.

“It’s the way forward and we have to get the government to see it this way,” Elias says.

“We’re not asking for permission but for them to join us. That’ll achieve more than what they’re doing now.

“The government and NGOs alone just can’t do it, we have to bring communities together and leverage the capacity of tech and startups.

“All of us together can get shit done.”